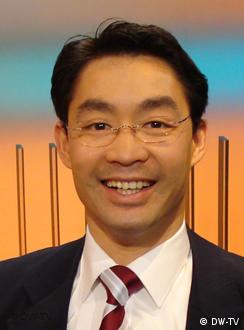 Young, dynamic and successful. Philipp Rösler is a star in the liberal Free Democratic Party in the state of Lower Saxony. Only 35 years old, he’s due to take over the post of Economics Minister in the state in February. Born in Vietnam, Philipp Rösler was adopted as an infant by his German parents.

Cartoon character Charlie Brown has always been his role model because he never gives up. That kind of determination is among the qualities which have helped Philipp Rösler in his rapid rise in politics. On 18 FEB 09 the 35-year old Free Democrat is due to swear in as Economics Minister for the state of Lower Saxony. His career seems to have been in three-year cycles. In 2000 he became the general secretary of FDP in Lower Saxony. In 2003 he became the leader of the FDP representatives in the state parliament. In 2006 he became state chairman of the FDP. Becoming a cabinet member in the state government is the crowning achievement. It’s been an unusual path for someone who was adopted by a German couple in 1973 from a Catholic orphanage near Saigon. Just nine months old at the time. When he was four, his parents divorced. He stayed with his father, a career soldier, who had no easy time in the 1970s as a single parent, his career suffered. Military bases were Philip Rösler’s second home. As a child he often ate in the officer’s mess. It was influential. In 1992 he joined the Bundeswehr medical corps. He became a member of the FDP the same year. Through the Bundeswehr he was able to study medicine, at the age of 28 he became a doctor and army medical officer. His political career developed in conjunction with his training. Today Philipp Rösler has completed a doctorate, is married and the proud father of three-month old twin daughters.

The country of his birth, Vietnam, he only visited in 2006, he says the emotional connection is limited.

Party colleagues and political opponents alike value his humor, intelligence and oratory. And he is seen as someone who makes up his own mind, and always good for a few surprises. Not long ago, despite all of his success, he said that he plans to leave politics by when he reaches the age of 45. And it does not seem like a ploy. For Philipp Rösler courage and honesty are most important traits a politician should have.