Optimistic Kerry meets with both Abbas and Netanyahu on peace talks

US Secretary of State John Kerry has met with Palestinian leader Mahmud Abbas with the aim of reviving faltering peace talks. Despite diplomatic setbacks, Kerry has said he is hopeful that tensions can be overcome. 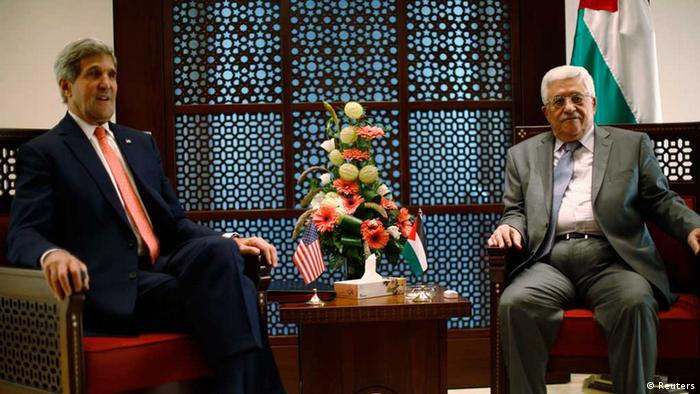 "As in any negotiation there will be moments of up and moments of down, and it goes back and forth," Kerry said in Bethlehem, where he met President Abbas.

"But I can tell you that President Obama and I are determined, and neither of us will stop in our efforts to pursue the possibility (of peace)," he said.

However, Israel did not share the same outlook. Earlier in the day, Kerry met with Israel's Prime Minister Netanyahu who said negotiations for a two-state solution to the conflict had failed to make any real progress. Netanyahu accused the Palestinians of creating "artificial crises" and trying to "run away from the historic decisions that are needed to make a genuine peace."

Senior Palestinian leaders have also shared a bleak outlook on the process saying that an Israeli plan announced last week for 3,500 more settler homes in the occupied West Bank has created a major obstacle to the success of the negotiations.

Israeli settlements in the West Bank and East Jerusalem are considered illegal by most countries, including the US. Kerry reiterated Washington's stance on the issue after meeting with Abbas, "The Palestinians believe that the settlements are illegal, the United States continues to believe the settlements are not helpful and are illegitimate," he said.

Kerry's shuttle diplomacy is working towards the ambitious goal of reaching a final peace deal by the end of April.

Meanwhile, former Israeli Foreign Minister Avigdor Lieberman was acquitted on corruption charges and is to return to the Cabinet.

"I congratulate you on the unanimous acquittal and am happy about your return to the Israeli goernment so we can continue working together for the good of the people of Israel," Netanyahu said in a statement from his office.

He did not say what role Lieberman would take, but the Foreign Ministry portfolio had been kept open for him pending the verdict.

Lieberman had been charged with alleged fraud and breach of trust, and was forced to step down as foreign minister before elections early this year to face the charges.