Opposition′s narrow win a boost in election year | Germany| News and in-depth reporting from Berlin and beyond | DW | 21.01.2013

The narrow victory by the Social Democrats (SPD) and the Greens in the regional elections in Lower Saxony has given the center-left opposition momentum for the national election in September. 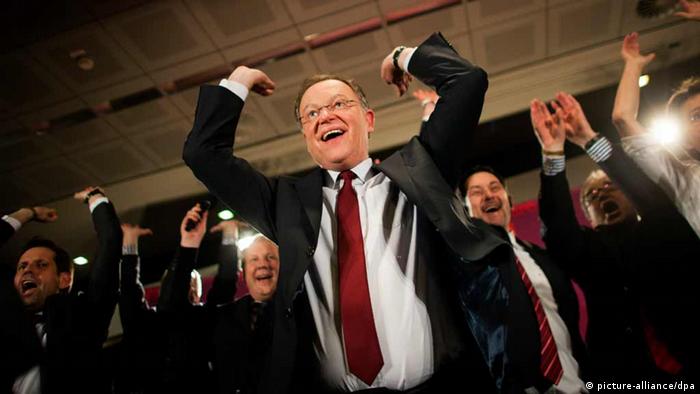 But then, close to midnight, the result was clear: the center-left opposition of Social Democrats (SPD) and the Greens, had one seat more in the state parliament. No pundit can remember such a close election. And the center-left's narrow victory is an exciting prelude to the general election in September in which Chancellor Merkel will be seeking a third term.

The results in Lower Saxony are a boost for the chancellor's challenger, the SPD's Peer Steinbrück. He is hoping to replace Merkel in the next elections. While the Christian Democrats lost 14 seats in the state parliament, the Social Democrats were able to gain one.

"That means that this year a change of government and power is possible, in view of the perspectives in September," Steinbrück said. 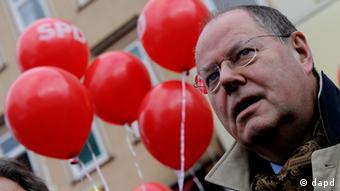 The Social Democrats' chancellor candidate admitted that he had had a series of mishaps, which didn't exactly help his party during the election campaign in Lower Saxony – one which included saying that Germany's chancellor ought to be paid more money – something that garnered criticism even from his own party. There was even speculation after that faux-pas as to whether Steinbück would be replaced by someone else as chancellor candidate. The SPD may now be spared that debate.

Center-left majority in the Bundesrat

With the change of government in Lower Saxony, the center-left opposition now has the majority in the Bundesrat – Germany's upper house of parliament, which represents the federal states. The Social Democrats have already announced Bundesrat initiatives for a nationwide minimum wage, tougher prosecution of tax evasion and the implementation of a property tax.

But chancellor hopeful Steinbrück's chances depend on the potential of his Green coalition partner, which has done well in other elections. In Lower Saxony, the Greens got a record 14 percent of the vote, nearly six percent higher than the region's last elections, making it the region's most improved party, in terms of votes.

Chancellor Merkel and her personal favorite David McAllister – Lower Saxony's outgoing state premier – have to reckon with the result. Weeks before the elections, polls were already saying that the coalition would not be re-elected because the Free Democrats would be unable to attain the required minimum 5 percent of the vote to enter the state parliament. The Christian Democrats embarked on a risky "relief mission" to save the FDP. Thousands of CDU supporters voted for their own party with their first vote and gave their second 'party vote' to the Free Democrats. Surveys showed that for 80 percent of FDP voters their favorite party was actually the CDU. While CDU General Secretary Hermann Gröhe spoke of vote splitting, SPD Leader Sigmar Gabriel scoffed that the FDP could only survive "with a blood transfusion." 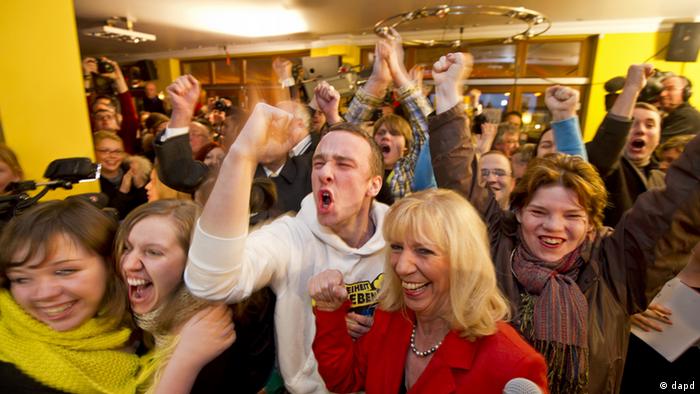 Free Democrats supporters celebrate at the results, which grant them one more seat in the state parliament

The Free Democrats were able to perform well as a result of "surrogate" votes, which helped give the party nearly 10 percent of the vote. But it does not save the center-right coalition, it only helps the FDP's struggling party leader Philipp Rösler. A bad result in Lower Saxony, his home state, would have cost the leader his job. He said that it was a "great day for the liberals" and stated that he would make personnel changes for the election year as early as Monday.

The CDU paid dearly for helping its coalition partner by losing the second 'party vote', despite receiving 36 percent of the votes ovefrall – the highest for any party. The CDU had obviously hoped to compensate for the loss in votes given to the FDP with the help of the German electoral system, which allows for additional seats when a party has many candidates elected directly for parliament. It is now questionable whether CDU voters will risk splitting their votes in the national election to help give the Free Democrats the five percent of votes needed in order to be in the Bundestag.

Uncertain future for the Pirates

The socialist Left Party, which had won an impressive 12 percent of the vote in the last national election, continued its downward spiral in Lower Saxony. After losses in regional elections in North Rhine-Westphalia and Schleswig-Holstein, it will no longer be represented in another state parliament. The party, which was created in 2005 by Oscar Lafontaine to bring together the former West and East German leftist movements, is in danger of losing years of hard-won gains to establish itself in reunified Germany. It is now only represented in four of the former Western German state parliaments. But the party is expected to perform well in the general elections due to former East German states where it enjoys broad support.

The Pirate Party, a darling of the media, had its worst result in state elections to date – failing to reach the five percent threshold to be represented in parliament. The party, which has more support among the young, had some embarrassing headlines in German media, and polls now show that their support stands at 3 percent in all of Germany. The future for them remains uncertain.

'FDP's success is not secured'

State polls in Lower Saxony saw Social Democrats and Greens win by a slim margin, and a surprise boost for the liberal FDP - not a trend for national polls, says political scientist Oskar Niedermayer. (21.01.2013)

It was a dream result for the pro-business FDP in Lower Saxony. But still, it wasn't enough to keep their coalition going with Merkel's CDU. This could spell trouble for the chancellor, writes DW's Volker Wagener. (21.01.2013)

Sunday's (20.01.2013) regional polls in the state of Lower Saxony have been billed as a crucial test prior to Germany's national elections. The outcome could predict who will control the chancellery come September. (20.01.2013)