Opposition banks on NSA in German elections | Germany | News and in-depth reporting from Berlin and beyond | DW | 10.09.2013

Many have described the election campaigns in Germany as dull. But the NSA scandal offers a strong and controversial point of debate. How is the topic being incorporated into various campaigns? 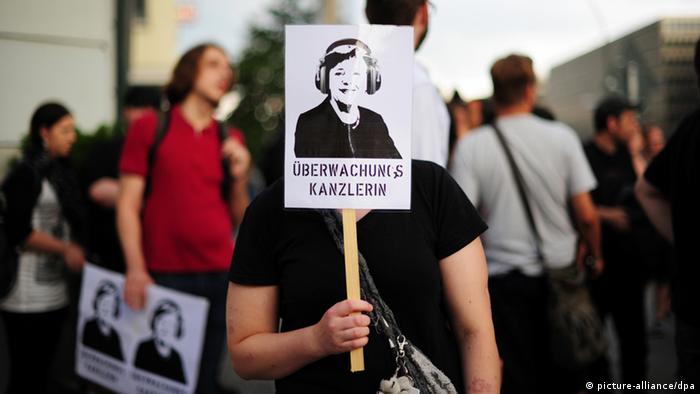 "Anonymity is not a crime" was the motto under which thousands of people gathered in Berlin for protests against state-led surveillance, two weeks ahead of Germany's federal elections. Demonstrators were joined by data protection groups as well as parties that included the Pirates, the Greens, the Left and the youth arm of the center-right Free Democrats.

The digitalcourage association sent one of its chairmen, an artist based in Bielefeld and going by the name "padeluun," to the event. The artist does not believe that Germany's major political parties will change course on internet policy despite the NSA scandal. "This kind of thing is just election campaign tactics," he said in an interview with DW. "All politicians already knew beforehand exactly what is going on with our data." 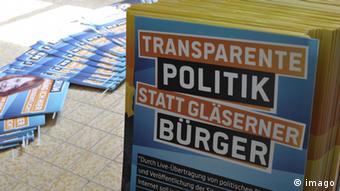 "Transparent policy instead of transparent citizens" reads a campaign poster

But the political opposition is betting on the NSA affair as a key weapon in its arsenal against Chancellor Angela Merkel and her governing coalition. The Social Democrats (SPD), Merkel's chief rivals, are leading the charge. Peer Steinbrück, the SPD's chancellor candidate, accused Merkel of having broken her oath of office. She swore to defend the German people from harm, he said, going on to charge that Germans' constitutional rights have been violated on a massive scale.

The NSA scandal also crops up on the SPD's campaign signs. One poster shows Chancellor Merkel digging around in her purse along with the caption, "Privacy: Uncharted territory for Merkel?", in a play on words that references a much-mocked comment Merkel made about the internet being uncharted ground.

The Green party also features the chancellor on its campaign placards. She's shown grinning next to a line that reads: "The people believe we know nothing about them."

After reports came out that the NSA allegedly also has access to users' smartphone data, the opposition seized the chance to focus attention on the issue. "If technology makes it possible, it's apparently being done," said Thomas Oppermann, the SPD's secretary in parliament. "That's why it's all the more important that the federal government takes a stand and defends German citizens' fundamental rights."

Steffen Bockhahn of the Left party agrees, saying, "The German government must finally deliver straight talk to the US government. Something like this must not and cannot be."

The Greens have struck a similar tone, recently calling for the EU parliament to undertake an investigation.

Merkel's Christian Democrats along with its sister party, the CSU, respond that the recent NSA revelations have little to do with Germany. Foreign policy spokesman Philipp Missfelder said, "The new allegations are an issue for the American government, the NSA and manufacturers. We in Germany have nothing to do with it, and I do not see it as a new escalation of this scandal."

His statement coheres with the government's larger approach of treating the surveillance affair as being in the past. 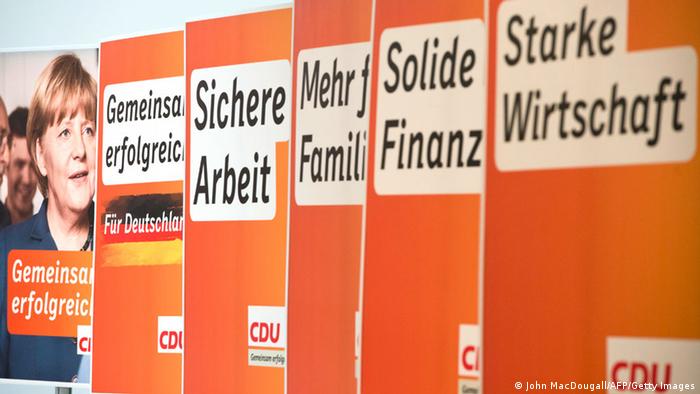 The CDU is trying to court satisfaction with the status quo

When the NSA scandal initially broke, Chancellor Merkel's spokespeople argued that espionage is absurd could not be tolerated among allies. But just ahead of the elections, she has taken a more restrained approach. Her coalition consisting of the CDU/CSU and the FDP rejected the proposal of a plenary debate on the topic of spying and surveillance practices.

"They want to kill the affair by not talking about it," Oppermann charged.

The FDP, however, has charted a different course from the CDU/CSU. The investigation has not been completed, and allegations of massive surveillance targeting German citizens' data has not been removed entirely from the table, sad Hartfrid Wolff, who represents the FDP in parliament's supervisory committee that oversees the intelligence services. 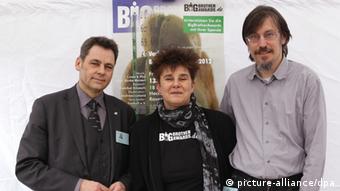 Padeluun (left) says he is disappointed in each of the parties

According to some, the NSA affair has been a godsend for an otherwise dull election battle. They include political scientist James Davis, who told DW, "This topic has finally livened up the campaign and ensured that the politicians talk about foreign policy."

He sees the advantage as going to the FDP, saying, "They have long had a clear position on data protection issues, and they can now profit from it."

The political expert believes the Pirates have also benefited. Despite having caused media sensations with their digitally-focused platform, they were long unable to get a true foothold with voters on data security topics.

When it comes to the SPD, Davis believes the opposition party's hands are tied despite what some have called the CDU's excessive caution in handling the surveillance scandal. "After all, the SPD agreed an accord allowing for cooperation between the NSA and German intelligence under Schröder's government in 2002," Davis points out.

James Davis believes that the right campaign tactics relating to the NSA affair could still sway some young voters. But there's evidence that the topic is of little interest to the voting public generally.

Is surveillance perhaps too abstract an issue for the election? Privacy advocate padeluun from digitalcourage remains disappointed in the political class' response, saying, "I don't know who I should vote for. I don't see a concept behind things with any of the parties."

The Chancellor's delay in signing a Western declaration on Syria has met with criticism at home abroad. Does this mean that Syria will grow in significance as a campaign issue in the election? (09.09.2013)