Opinion: Why a Republican nominee Donald Trump is a good thing | World| Breaking news and perspectives from around the globe | DW | 04.05.2016

Opinion: Why a Republican nominee Donald Trump is a good thing

With Ted Cruz bowing out after a blistering defeat in Indiana, Donald Trump will be the Republican Party’s presidential candidate. That’s hard to swallow, but it’s good for both democracy in the US and the GOP. 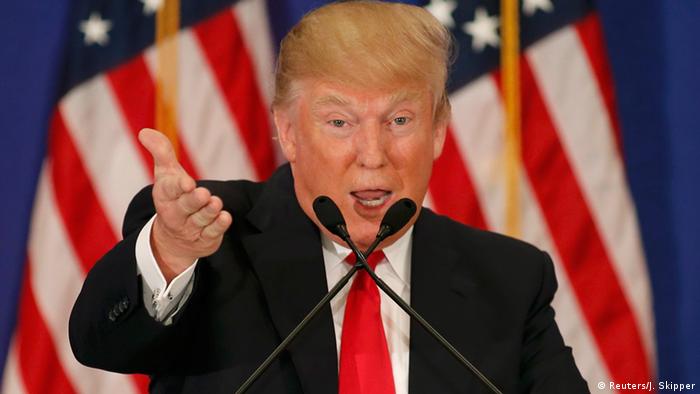 Donald Trump is a demagogue. He riles people up against each other by appealing to their lowest instincts. His campaign has been one long rant, fueled by constant fear-mongering and the belief that all it takes to right the many wrongs in the country is an authoritarian figure - like himself - with the will to fix them. For all those reasons, a person like Donald Trump should never be allowed near elected office, let alone the presidency of the most powerful country in the world.

Having said all that, it is nevertheless good and important that after his win in Indiana Donald Trump is now the de-facto Republican presidential nominee.

First, it is crucial at a time when trust in the established parties, the traditional political personnel, the political system and the democratic process has eroded dramatically - as evidenced by the rise of Donald Trump and Bernie Sanders - that the rules of the democratic game are not changed in midstream.

By steamrolling Cruz in Indiana, Trump put an end to any hopes his rivals or the Republican Party's leadership may still have had to somehow snatch the presidential nomination away from him through last-minute backroom deals, or a change of rules at a contested party convention.

Such a scenario would have been a disaster for the democratic process, however flawed it may be, and would have only fueled the resentment and distrust of many American voters.

To put it differently, Donald Trump has won 28 contests so far compared to 14 combined wins racked up by Cruz, Kasich and Rubio, his closest competitors. He also bested his rivals by winning more primary votes and more delegates.

All of it makes Donald Trump the decisive winner of the Republican primary. It's hard to stomach, but he has earned the right to be the GOP's flag bearer in this year's presidential election. To deny him the right would only prove the point Trump has cleverly used to score big political points recently, namely that the political system is "rigged."

Time for a GOP autopsy

But Trump's win is also important for the Republican Party – or what's left of it. For far too long the once proud party of Abraham Lincoln has managed to avoid taking a long, hard introspective look at what it has become since it allowed tea party radicals to lead it around by the nose.

Now the chickens have come home to roost. Perhaps a primary in which its top two candidates Trump and Cruz were successful by explicitly insulting their own party will finally give the GOP pause. It is high time for Republicans to conduct a full autopsy of their recent history and to change course.

The third reason why Trump's nomination is important is because it gives American voters the chance to show that he does not speak for the majority of them in the general election. It is essential for the health of the political system that a demagogue like Trump - who has the strong support of the vocal, but comparatively small segment of Republican primary voters - is put into his place in November. American democracy is strong and vibrant enough to do just that.