Romanian President Basescu remains in office. The referendum failed to get the required 50 percent turnout. But despite that victory, DW's Robert Schwartz argues Basescu should step aside and make way for new talent. 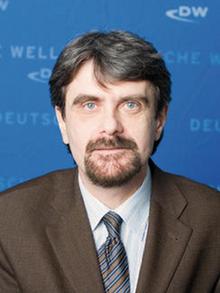 As soon as the polling stations closed, both sides swiftly declared victory. Trajan Basescu, the suspended conservative president, said the people had prevented a coup d'etat and had confirmed his mandate as head of state. Liberal Interim President Crin Antonescu said he wanted to wait for the official result and for the decision by the constitutional court. His supporters though seemed equally confident of victory as Basescu's camp. Should the power struggle continue, Romania is in danger of jeopardizing the achievements of its short democratic history.

But the facts are clear: The referendum initiated by the social-liberal government under Prime Minister Ponta failed on two levels: Voter turnout was below the 50 percent required to make the outcome binding. Only about 46 percent of Romanians have played along with the government's plans to impeach the president. This was in part because the conservative opposition - supporting Basescu - had called for a boycott of the poll.

But the Basescu camp currently has little more than 20 percent of the public behind it. That means that the socialist Prime Minister and his ally, Antonescu, had to admit that their supporters did not care enough about the issue to go out and cast their votes. Out of those who did go to the polling stations, some 88 percent did indeed vote for Basescu to be impeached, but the bottom line is that more than half of the country simply didn't care about it either way and stayed at home.

Shooting itself in the foot

Only two months ago, things seemed to be looking quite different. Public opinion polls had indicated that over 70 percent of Romanians supported the impeachment. But then Ponta and Antonescu began with a swift overhaul of the entire state apparatus. Under the pretense of democratic process the government ignored decisions by the country's constitutional court. All crucial positions were filled with loyal party members from their own camp. The finishing touch was to be the impeachment of the president. But now this last step has miserably failed - just as it did in 2007 when there was a previous attempt to impeach Basescu.

Every further attempt by the social-liberal coalition to fix the situation in order to secure its own political survival will also fail. Both the Romanian people and the European Union have lost trust in the Ponta government. The suspicion that the government had tried to control the judiciary to shield its corrupt politicians from investigations, will most likely remain.

So what now? The constitutional court will have to declare the referendum null and void as voter turnout was below the required 50 percent. The government camp has said it would respect that decision - but in the run up to the referendum had also said that it would be parliament that would have the last word over the issue. And in parliament it's the government coalition that has the majority. So in that case, the constitutional court's decision might be ignored after all. And that's not exactly what you'd expect from the rule of law in an EU member state.

Victor Ponta has lied several times in the past - which will be bad both for his country and for his people. Plagiarism in his PhD thesis, double-dealings, contradictory positions in Brussels and back home in Bucharest - he won't be able to stay in office for much longer. His partner Antonescu will most likely also soon vanish from the political stage. Ahead of the referendum he said that should the impeachment fail, he would resign from politics. Will he stick to those words?

But the euphoria in the Basescu camp will also be rather short lived. The old head of government will indeed return to office but his power and influence have suffered a blow. A cooperation with the social-liberal government will be virtually impossible. A continuation of the political crisis though would drag Romania into a dangerous maelstrom that even Basescu - who was a sea captain before turning to politics - won't be able to maneuver his way out of.

In order for the country to return to calmer waters, there is basically only one option: Basescu has to step down despite his victory and make way for early presidential elections later in 2012, parallel with the parliamentary elections to be held at that time. It's high time for Romania to part with its old political establishment - 23 years after the fall of the communist dictatorship. Young and credible politicians need to get an authentic chance in order for democracy and European values to prevail after this summer's grotesque political drama

In European Union politics, party loyalties play less of a role than they do at the national level. But affiliation with the left or right can still have an effect in Brussels - as in the current case with Romania. (19.07.2012)

Is Romania's Prime Minister Victor Ponta a threat to democracy? A power struggle between Ponta and President Traian Basescu has made other EU countries very uneasy. (13.07.2012)

Brok: Romania is in 'clear violation' of EU law