Opinion: Great expectations set on India′s new government | Asia| An in-depth look at news from across the continent | DW | 16.05.2014 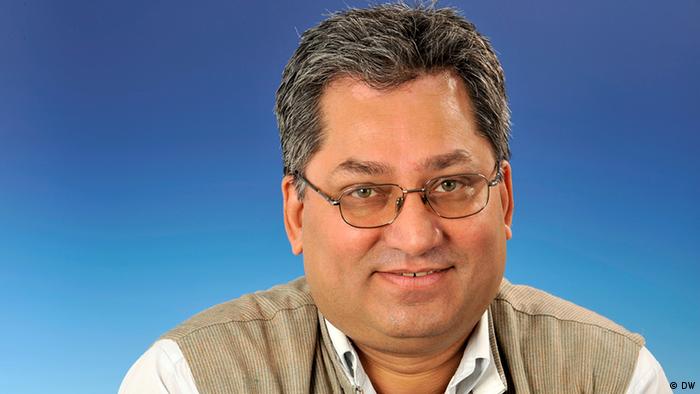 It is the biggest election victory of any party since Rajiv Gandhi's landslide in 1984. Modi's win ends years of coalition government characterized by bickering and gridlock amongst numerous ruling parties. One party will now dominate proceedings. Formally, BJP will rule with its partners in National Democratic alliance NDA, but it no longer needs them.

It is a turning point in the history of India in many ways. A record 551 million people out of a total of 814 million voters went to the polls in the world's largest elections. And the credit for the record turnout goes to Modi.

He ran an effective - largely presidential - campaign against the Congress Party and India's most famous political dynasty, the Gandhi family. In the process Modi has dealt them a devastating blow. The outcome proves that a well thought out strategy can produce new leaders, something India has lacked for some time.

A key part of this strategy was that Modi secured the backing of big business early on. The BJP also broke with past precedents by announcing Modi as the prime ministerial candidate well in advance of the election campaign proper. In this way it was able to counter the popularity of the Gandhi family in rural areas.

The outcome also shows that Modi and BJP not only made huge gains in the Hindi-speaking areas of the north and central India but also attracted support in states like Arunachal Pradesh, not normally associated with the BJP. This means that Modi has effectively consolidated his party's core Hindu base and expanded to other parts of India.

With Indian electioneering now at its height, hate speech has become a part of political discourse. The Election Commission has been stirred to act, amid fears the electoral atmosphere would be poisoned. (25.04.2014)

Clearly Modi's pledge to return the country to economic growth and to crack down on corruption struck a note with the millions of young Indians wanting jobs and those who were tired of the endless corruption scandals of the outgoing Congress-led administration. And he stayed on message throughout a campaign waged both traditionally and on the social media. Modi ended the campaign with over 4 million Twitter followers, more than double that of any other politician.

The BJP campaign also profited hugely from the weaknesses of the Congress Party. Congress failed to put a positive message across to voters. By refusing to name a leader for the post of prime minister voters got the impression that the Gandhi family felt it was theirs by right.

Moreover, the party's vice president, Rahul Gandhi, never convinced Indians that he was up to the job. In a campaign dominated by personalities, Gandhi was no match for Modi, lacked his charisma and appeared out of touch with ordinary Indians. Congress lost the race even before it had started.

After forming a new government Narendra Modi's most important task will be to unite the country. This will be difficult after such an aggressive campaign. He will have to overcome the religious divide and soothe the nerves of those who fear his brand of Hindu-nationalism, especially the country's 180 million Muslims.

His priority will be to put India back on the road to economic growth and development by restoring business confidence, creating jobs for millions of unemployed young people, creating better prospects for the growing middle class and improving the country's infrastructure.

Modi has to continue the process of modernizing India and making the country fit for the 21st century. With 500 million people on or below the poverty line this is a Herculean task.

It will also be important for the Modi administration to improve relations with Pakistan and not to allow firebrands in his party to endanger the progress made in the recent past. He will also need to put relations with India's arch rival, China, on a sound footing. Border disputes remain unresolved. Indeed, in view of Modi's desire to increase trading ties, relations with both these neighbors may improve.

Ties with Washington are thorny. The US has declared India to be its most important partner in South Asia but has for many years refused Modi an entry visa accusing him of failing to intervene in the religious riots in his state of Gujarat in 2002 which cost over 1,000 lives, mostly Muslims.

Modi has always denied any involvement or responsibility for the troubles and successfully kept the issue out of the election campaign. In recent times the US has tried to repair its relationship with Modi, but the issue is likely to haunt both the US and India for a long time.

This may open new vistas for Indo-German and Indo-European relations. The challenge for both partners will be to reach an agreement on free trade as soon as possible. India will need to improve its business climate for potential foreign investment, secure intellectual property rights and improve recourse to legal remedies in the case of dispute.

Thus, the new government faces enormous challenges both at home and abroad. Modi has got the job he craved. Now he will have to show that he has the stature required to unite and lead India through what promises to be a very challenging period.