Americans take heart: the United States is apparently not the only major western democracy unable to pull off an election. Germany's vote on Sunday has been a disaster from the get-go, says DW-WORLD's Marc Young. 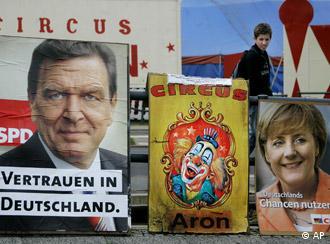 I believe Berlin's daily newspaper Der Tagesspiegel got it right: The best thing you can say about this election is that it was a very short one.

It started with a faked confidence vote, was followed up by a constitutional challenge, and ended with two would-be chancellors squabbling over the right to form the next government. To top off this extremely absurd electoral circus, the death of an insignificant neo-Nazi parliamentary candidate will delay the official outcome for two weeks. The only thing missing was Florida-style butterfly ballots.

Certainly those Germans who smugly point towards America's election fiasco in 2000 as evidence of how broken the United States political system is, should be much quieter at the next cocktail party they attend.

But how did Germany, that once shining model of stable parliamentary democracy, get it all so wrong? This deeply flawed election and its deeply unsatisfying result have exposed dangerous cracks both in German society and its political system.

Neither the ruling center-left coalition of Social Democrats (SPD) and Greens nor the conservative Christian Democrats (CDU) and their pro-business allies, the Free Democrats (FDP), managed to win a majority.

Now Germany faces either the prospect of a not so grand coalition of the two major parties or some inherently instable three-party grouping such as a "traffic light" with the SPD, Greens and FDP. That is, if the party leaders, who continue to spit campaign-trail bile at one another, manage to cobble together a government at all. If not, we could see the worst of possible scenarios, that is, new elections. 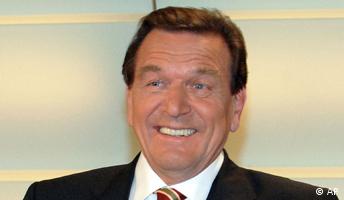 German Chancellor Gerhard Schröder smiles prior to a tv discussion after the German parliamentary election in Germany's capital Berlin on Sunday, Sept. 18, 2005.

At the moment, things do not look good. Schröder, apparently giddy over the fact his SPD hadn't been completely routed at the polls, put on an especially ugly performance at a televised round table discussion of the leaders of all major parties. Despite the fact the SPD is almost certain to win fewer seats than the conservatives, he arrogantly refused to admit he'd lost the election.

Maybe he was delighting in schadenfreude over the poor result for Merkel's CDU. Maybe he was hoping to encourage her conservative rivals to sharpen their knives after their dismal showing. However, he is doing Germany no favors by making the ridiculous claim: "No one aside from me is in the position to form a stable government."

Huh? Did I miss something?

This whole circus started when Schröder deliberately lost a no-confidence vote on the grounds he could not ensure a steady working majority within his own coalition. Now after his Social Democrats don't even manage to remain the largest party in parliament, he's suddenly the guarantor of stability?

Merkel fritters away her lead

Don't get me wrong. I don't think Merkel would be any better suited to form a solid government, especially with voices within her own party already starting to blame her -- and rightly so -- for the conservatives' horrendously run campaign. Never completely accepted at the top of the CDU, she certainly hasn't made any fans by frittering away a double-digit lead in opinion polls in only a matter of months. 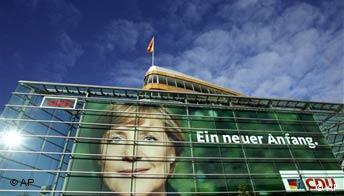 A poster of an airbrushed Angela Merkel still adorns the CDU headquarters in Berlin. " A new beginning," it reads

When Schröder decided last May to bring forward Germany's general election by a year, he had hoped to get a mandate for his unpopular economic reforms. The logic was that either he would be vindicated by the voters or the conservative opposition would take over the job of overhauling the world's third largest economy. But German voters have instead opted for some messy compromise that may simply prolong the country's woes.

To make things worse, Schröder's intentionally lost confidence vote has muddied the workings of the country's constitutional institutions. Although the constitution does not allow the chancellor to dissolve parliament, he or she can now do so with a faked confidence vote. Therefore it is imperative the German parliament pass an amendment establishing a proper method to dissolve itself in the future.

That's the only sure way to avoid a repeat of the grand political farce we've had this summer.

The result of the German polls is a big surprise. Contrary to pollsters' predictions, Germans didn't vote for a change in government. A grand coalition is the only way out of the mess, says Deutsche Welle's Uta Thofern. (Sept. 19 2005