Close German-Russian ties have been a constant for both Schröder and Putin in their respective foreign policies. Despite having benefited from it, their relationship suffers from a fundamental flaw. 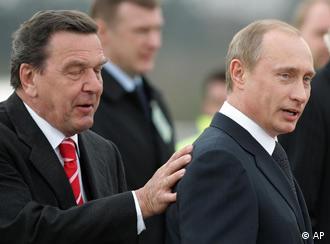 Has Schröder done enough to push Putin towards democracy?

Media-friendly "buddy politics" between German chancellors and Soviet and Russian leaders have shaped German-Russian relations for the past 15 years. Former Chancellor Helmut Kohl and Mikhail Gorbachev got along just fine, and Kohl and former Russian President Boris Yeltsin did even better. 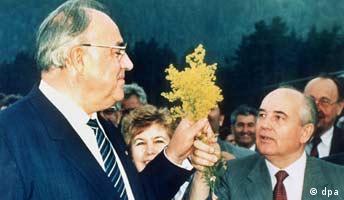 But Schröder and Putin went a step further: "Gerd" and "Volodya" obviously also get along on a personal level, as proven by Christmas and birthday parties the two men have spent together.

They also focused on tightening relations between Germany and Russia on a political level. During the past five years, there hasn't been another other country that Russia has been closer to than Germany in terms of meetings and exchanges between high-ranking government officials. That includes regular summits between Schröder and Putin, government meetings and the "Petersburg dialogue," which was initiated by the two men and is meant to bring the two countries' elites closer together.

Even if Putin's foreign policy has gone back and forth, the partnership with Germany has remained stable. His affinity to Germany -- he speaks the language and lived in East Germany -- certainly plays a role. Schröder's Russia policy also helped to shape Putin's view on Germany, however. 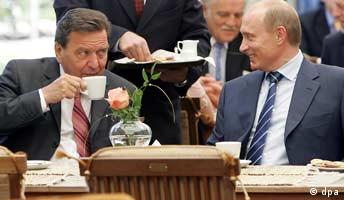 Schröder and Putin during a meeting in Russia on July 3, 2005

The German chancellor has avoided criticizing Putin's domestic policy record in public and only voiced concern behind closed doors. This "quiet diplomacy" helped improve ties and found its climax in Schröder's public announcement that Putin was a "flawless democrat."

Statements like these made Schröder Putin's most important political partner in Europe. In return, Schröder's stand against US policy on Iraq only gained weight because of backing by France and Russia. The partnership between Germany and Russia became especially important during Schröder's second term in office after the 2002 election.

There were other advantages as well: Both countries benefited from a flourishing trade and economic exchange. German Finance Minister Hans Eichel was able to fix some of his budget problems by receiving debt payments from Russia ahead of time. 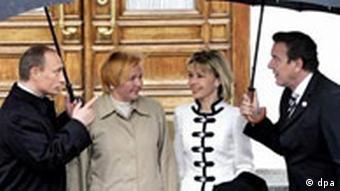 Schröder and his wife Doris with Putin and his wife Lyudmila during the celebrations marking the end of World War II in Moscow on May 9, 2005

Berlin's support also helped Moscow's ambitions to join what's now the G8 and the World Trade Organization. Germany's role as the driving force behind Europe's policy on Russia also came in handy, as did Germany's willingness to move ahead of the rest of the EU on certain issues, such as visa regulations.

Putin's approval for the Kyoto climate control protocol was a success for Schröder, as was his role during the Ukrainian crisis of 2004. Putin's trust in Schröder made it easier for him to accept change in Kiev.

But a central problem in German-Russian relations remained despite shared interests and buddy politics: Too little agreement on basic political values existed for a real partnership, as shown by developments in Russia. 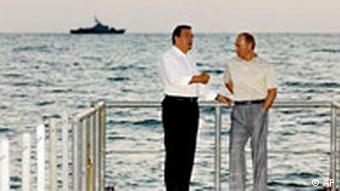 Since the end of the Soviet Union, neither democracy nor the concept of a constitutional state have taken hold in Russia. The country's political elite and large parts of the population are disillusioned because of their experiences during the 1990s. The goal of modernizing Russia's economy has pushed democratic principles to the sidelines.

Schröder has accepted this for reasons of Realpolitik. He didn't manage to solve the basic problem -- his possible successor, Angela Merkel, is unlikely to fare any better.

Amid the crisis in Ukraine, Germany's chancellor finds himself wedged ever tighter between a rock and a hard place as the European leader with the closest ties to Russia's Putin. (Nov. 30, 2004)

Is US or French alignment better for Germany's interests? What should be the function of the Bundeswehr? Would Germany benefit from a permanent seat in the UN Security Council? Here's what the parties have to say. (Aug. 3, 2005)