The riots in France show that the integration model has failed. Things don't look much better elsewhere in Europe, where similar acts of violence could come as a result, says DW's Andreas Noll. 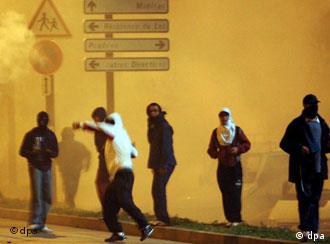 Venting their anger in Toulouse

Liberty, Equality, Fraternity -- few things in France are celebrated more frequently than the century-old reason of state. After eleven nights of riots in a row, after burning cars throughout the country, attacks on disabled people and shots at policemen, this credo is nothing more than a wish -- reality is a different issue.

Has the French state failed? Over the last decades, governments across the political spectrum have invested several billion euros in modernization projects for problem areas -- none of them with lasting effects.

The previous socialist cabinet set up neighborhood police departments focused on dialogue, but was unable to take back lawless enclaves. 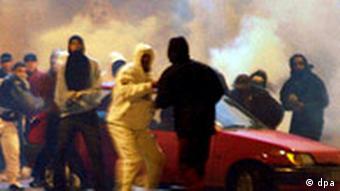 Current Interior Minister Nicolas Sarkozy tried the law-and-order approach, but after 11 nights of police crackdown more and more cars are burning in more and more regions of the republic. The emergency plan announced by the prime minister and the president's admonishments will remain meaningless -- and the rioters know it.

From success to failure

This is happening even though France's model actually celebrated success stories in recent years: The French soccer team's victory in the 1998 World Cup is an example as it was mainly made up of the children of immigrants. The ecstasy of a jubilant nation knew no bounds.

Things have changed since then: All agree that the system of quickly turning immigrants into Frenchmen on paper has failed. Critics have a lot of arguments on their side. The French passport is no guarantee for intergration nor does it supply people with work. 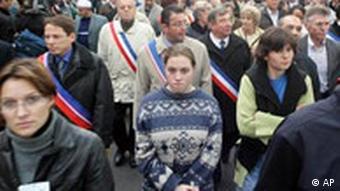 Protesting against the violence

Erecting satellite towns around Paris, the economic heart of centralized France also proved to be a fatal mistake. These ghettos that were celebrated as future-oriented during the 1960s are so desolate that it's almost impossible to imagine a restoration.

People are currently calming themselves by blaming Sarkozy. He provoked many with his announcement that he would clean the problem districts with a "power-hose." Even some of his supporters turned against him when his called rioters "rabble." 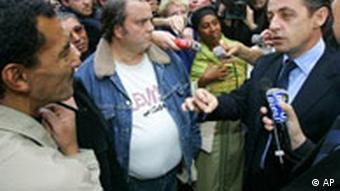 Sarkozy said these things even though he has realized that "liberty, equality, fraternity" has lost its luster. He's been fighting for affirmative action against the president's resistance. He wants to give Muslim immigrants preferential treatment in the hiring process for the civil service and do away with the principle of equality.

But an unemotional debate about this issue is not possible right now. France helplessly watches as youngsters set on fire the cars of their equally impoverished neighbors, how they torch the schools of their siblings, how they attack public transportation and enjoy the public's attention while they destroy the foundation of their own lives.

A lack of perspectives might help to explain these outbursts of violence from a sociological point of view, but society has no idea how to deal with this apocalyptic irrationality. Many just see how these young people are unable to escape the misery and make use of the existing chances of moving up socially.

If it's true that France with its five million Muslim inhabitants foreshadows developments elswhere in Europe, societal cohesion isn't only crumbling in the "grande nation."

Attempts to integrate rapidly growing Muslim communities in other countries haven't been much more successful. Europe has so far not found a solution for the integration of a group that has a hold on the future -- at least from a demographic perspective -- but that has no idea what this future should look like.

Rampaging youths injured 30 policemen and torched hundreds of cars overnight Sunday as rioting raged on for an 11th night in France despite a vow from President Jacques Chirac to restore public order. (Nov. 7, 2005)

France is facing the worst racial unrest in decades. Could the same happen in Germany, home to a large immigrant population which has been spared violence so far? Experts are skeptical. (Nov. 5, 2005)

Tough Times for Muslims in Europe

A report by human-rights watchdogs confirms something many Europeans may have noticed on their own: Life has gotten harder for Muslims in Europe since the terror attacks of Sept. 11, 2001. (March 14, 2005)