Opinion: Commodification and Privatization of the Planet | Globalization | DW | 16.05.2007

Opinion: Commodification and Privatization of the Planet

By protecting seeds und intellectual property laws, the G8 is encouraging the privatization of life, providing monopoly market access to multinational corporations and driving thousands of Indian farmers to suicide. 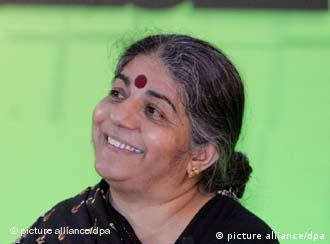 Shiva is a well-known environmental activist

Dr. Vandana Shiva is a physicist, ecologist, activist and author. In India she has established Navdanya, a movement for biodiversity conservation and farmers' rights. She also directs the Research Foundation for Science, Technology and Natural Resource Policy.

The biggest threats posed by globalization are the commodification and privatization of the planet.

The Trade Related Intellectual Property Rights (TRIPS) Agreement of WTO at the 1996 Uruguay Round of the General Agreement on Tariffs and Trade marked a key turn in the intellectual property process by privatizing life forms and biodiversity.

TRIPs not only made Intellectual Property Rights (IPR) laws global geographically, it also removed ethical boundaries by patenting life forms and biodiversity. Living organisms and self-creating life forms, including seeds, were thus redefined as machines and artifacts made and invented by the patentee.

Under intellectual property rights and gave the patent holder a monopolistic right to prevent others from making, using or selling seeds. Seed saving by farmers has now been shifted from a "sacred duty" to a criminal offence of stealing "property." Article 27.3 (b) of the TRIPs agreement, which relates to patents on living resources, was basically pushed by the life science companies to establish themselves as lords of life.

As a result of TRIPS, the chemical companies of the world have bought up seed and biotechnology companies and reorganized themselves as life science corporations, claiming patents on genes, seeds, plants and animals.

Eighty percent of all genetically engineered seeds planted are the intellectual property of Monsanto. The agricultural company also owns patents on a wide variety of cotton, mustard, soyabean -- seeds that were not "invented" or "created" by Monsanto but have been evolved over centuries of innovation by farmers relying on natural biodiversity.

As a result of globalization, corporations like Monsanto have gained monopoly control over seeds. In India, they first entered through hybrid cottonseeds and later with genetically engineered insect-resistant Bt cottonseeds. High cost seeds, which are both non-renewable and unreliable, have resulted in severe hardship Indian farmers, driving thousands to suicide. In a parliamentary debate in 2006, the government figures were 150,000 farm suicides in the last decade. The "suicide belt" overlaps with regions where corporations like Monsanto have established seed monopolies.

Yet, instead of promoting access to seed for all farmers and access to medicines for all, the G8 is promoting monopoly access to markets for the corporations, which are also the seed biotechnology giants.

The priorities for the G8 as identified by the Personal Advisor to the Chancellor repeatedly refers to stronger IPR rights for corporations while failing to take account of the consequences of seed patents for farmers. The note on priorities states:

"Innovation is at the root of welfare in knowledge-based societies. Protection of innovation, especially in international trade and investment relations, plays a decisive role for the willingness to invest in research and development. We see a need for action particularly in the improvement of international cooperation to implement intellectual property rights in the fight against product and brand piracy."

There is no mention of biopiracy as a part of intellectual property rights. Product patents are assumed to be a right, and process patents are defined as “product piracy." This is a direct support to corporate seed monopolies.

Instead of making a commitment to the outstanding review of TRIPs, the G8 priority is to create new agreements to enforce monopolies and patent violations for corporations.

If TRIPs has killed hundreds of thousands of farmers in India, by denying them seeds, how much more violence will an expanded version of TRIPs, driven by the G8, unleash on the poor of the world? Corporate intellectual property rights have become a threat to the survival of the poor.

"A New Day is Dawning for Globalization Critics"

Around 100,000 demonstrators are expected at the G8 summit in June. DW-WORLD.DE spoke with Sven Giegold, one of the founders of Attac, a group which describes itself as a skeptical of globalization, about the protests. (22.05.2007)

It’s a meeting between the leaders of the world’s most rich and powerful countries and they have a packed agenda. DW-WORLD.DE takes a look at the global issues -- economics, climate change and Africa. (23.05.2007)

Professor Jeffrey Sachs, Director of the Earth Institute at Columbia University and Special Advisor to UN Secretary-General Ban Ki-moon outlines what action the G8 must take to end poverty and retain credibility. (16.05.2007)