Opinion: Citizenship Tests a Good Idea for Germany | Germany| News and in-depth reporting from Berlin and beyond | DW | 21.03.2006

Germany should introduce a test for immigrants seeking German citizenship. But it should be the result of a national debate about what's fair to demand of all foreigners -- not just Muslims, says DW's Deanne Corbett. 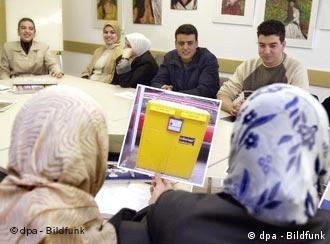 Integration courses should help immigrants on the path to citizenship

Two German states have so far put forward proposals on how to make the citizenship process for foreigners more rigorous. They include a list of questions on cultural norms to serve as a guideline in discussions with citizenship candidates in the state of Baden-Württemberg, and a list of general knowledge questions on German history, geography, politics and culture which, according to state ministers in Hesse, new citizens should be able to answer.

The proposals are a step in the right direction. The fact that several other states are now considering how they would wish to regulate citizenship in the future is proof that this discussion is long overdue, just as the political debate about how to regulate immigration -- a debate that was unsatisfactorily resolved only two years ago -- was also long overdue.

Germany is an immigration country, despite the fact that many Germans would prefer to continue denying the obvious. Given its demographic development, it will continue to need immigrants in the future. Integration, however, is in desperate need of improvement. The decisions now being made about integration measures, as well as citizenship tests, are aimed at ending the ghettoization of foreigners, especially Germany's large population of Muslim, mainly Turkish, immigrants.

It's no coincidence that the push to regulate immigration and citizenship -- not just in Germany, but also in other EU countries -- is happening in the post-9/11 climate when Muslims are under unprecedented scrutiny. The broad threat of Islamic extremists with their well-documented hatred of the Western way of life has opened Germans' eyes to the presence of Islam's followers among them, and much of what they see is negative, whether it's a newspaper report about an honor killing in Berlin, schoolyards where more Turkish is spoken than German, or the forced marriage of a young, headscarf-clad woman.

While the desire to "weed out" those immigrants who steadfastly refuse to assimilate to or even accept the German way of life is understandable, Germany should not fall into the trap of allowing each of the federal states to regulate citizenship as it sees fit; this would only allow a plethora of flawed concepts such as those proposed by Baden-Württemberg and Hesse to flourish.

Baden-Württemberg's "conversation guidelines" for civil servants, for example, immediately earned the nickname of the "Muslim test," and not without reason. But many of the questions included to help the interviewer evaluate how tolerant a Muslim candidate is -- questions about female equality and homosexuality, for example -- would likely elicit politically incorrect responses even from born-and-bred Germans. Hesse's list of 100 questions that someone becoming a German citizen should be able to answer was also dubious. It's doubtful that a large majority of Germans would be able to rattle off three non-Alpine German mountain ranges, know what Otto Hahn was famous for, or remember that Caspar David Friedrich's painting of Rügen features chalk cliffs as its motif.

An intimidating list of quiz show-like questions is not the answer, nor is a conversation aimed at interrogating Muslims about the intensity of their beliefs. If anything, questions asked in a citizenship interview should focus on what it means to be German, though for this to happen, Germans must first come up with a definition they themselves are comfortable with. German lawmakers would also do well to remember that granting citizenship means more than rubber-stamping an application and issuing a passport. Rather, it is the culmination of an integration process that takes place in the years leading up to an immigrant's application for citizenship. In this respect, a continued commitment to funding integration initiatives is essential.

It is perfectly acceptable to demand that immigrants who want German citizenship be asked to demonstrate their commitment to their chosen country by learning the language and making an effort to understand the political system, history and culture. An appropriate, nationally approved test, as well as a citizenship ceremony as is common in countries founded on immigration -- the United States and Canada, for example -- could even turn the granting of citizenship into a proud moment to be celebrated.

The German state of Hesse plans to introduce a test for foreigners seeking German citizenship. They would have to answer questions about German language and culture, and swear their loyalty to the country. (March 15, 2006)