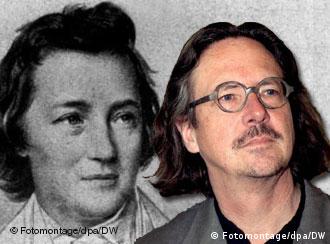 Not a perfect match: Heine and Handke

When Peter Handke received an honorary doctorate from the University of Salzburg in 2003, he promised he would withdraw from public life. "This is the last time that I am showing my idiocy openly," Handke said. And not only that: "From now on, you can take me to court, if I once again in my life appear in public."

Peter Handke is not easy to love. He is also not very good about keeping promises. He showed himself to be an "idiot" on at least one other occasion. On March 18, for example, he stood next to the grave of former Serbian president Slobodan Milosevic and took part in one of the most grotesque funerals the world had ever seen.

A failed, semi-forgotten leader and dark-minded opportunist, who ruined his own nation and brought nothing but death, pain and suffering to everybody else, was getting buried in his own backyard. The whole world was watching this mock state funeral as the celebrated Austrian poet -- like a true court jester or, perhaps more appropriately, a politburo idiot -- stood by.

There are idiots and idiots

When Handke speaks of himself as an idiot, he does not mean to imply that he is mentally deficient. He also doesn't see himself in the same way in which Dostoevsky saw Prince Myshkin, the main character of his novel "The Idiot" -- as an overly naive goody-two-shoes, a prince of fools with a Slavic soul to top it off.

When Handke calls himself an idiot, he does so in the original, ancient Greek sense of the word idiotes: somebody lacking skills, a private person, one who is on his own. Back then, idiots lived on the outskirts of the city-state. Their bad judgment in political matters made them outsiders. They were not necessarily stupid, but definitely unreasonable. You didn't want to have anything to do with them. They were almost as bad as foreigners.

What is happening in Germany right now, however, is outrageous and idiotic -- in almost every sense of the word. An independent jury awarded Germany's most prestigious prize to one of the most famous -- and most difficult -- writers in the German language today. The mayor of Düsseldorf called the writer personally to congratulate him. The writer said, "Thank you very much, I'm thrilled." But then the political cry-baby establishment got all huffed up because the writer -- whose literary genius is not questioned -- is a political "idiot."

For the media, it's a field day.

A comedy of situation?

Bowing to the pressure of vociferous critics and he-said-she-said media reports, a member of the jury, a historian-turned-politician, publicly distanced himself from the problematic writer -- but only post factum, after the prize announcement bearing his signature was made public and the general hullabaloo came over Germany. Other politicians -- encouraged by the tardy return of at least one prodigal son -- turned to hyperbole and, all of a sudden, the writer started sounding like an epitome of evil, Lucifer with an Austrian accent who ascended directly from Hell to spread hate and destruction.

Handke, at least, admitted he was an idiot. But the German political establishment -- and especially the local politicos who rarely, if ever, get a chance to speak to a national, let alone, international audience -- should pause for a moment to reflect on what they have done. By declaring themselves ready to revoke the decision of an independent jury, they have seriously damaged not only their own reputation, but the very institution of the Heinrich Heine Prize.

Whoever gets this award next should think twice before accepting it -- unless things are made clear and the prize gets its name changed to "Heinrich Heine Prize for Political Correctness."

Let's be serious. Who needs literary critics and philosophers -- not to mention literature itself -- if local politicos will always know better?