Opinion: A Budding Seed of Doubt

Nothing more stands in the way of Turkey's bid to join the EU. Both sides have cleared up their differences. But are the irritations between Brussels and Ankara really dispelled? DW-RADIO's Bernd Riegert doubts it. 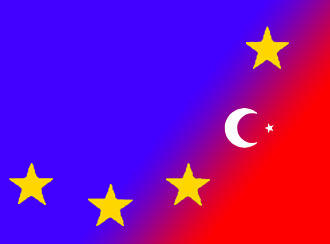 Turkey: the new star on the European horizon?

The Turkish Prime Minister Recep Tayyip Erdogan appears to be adaptive. He recognized his tactical error in provoking the European Union with a legal ban on adultery shortly before the Commission was to decide on membership negotiations.

Erdogan promised Brussels to design Turkey's legal reforms so they are consistent with the EU. He also said the penal code will be pushed through by Oct. 6, when EU Expansion Commissioner Günter Verheugen will publish a report on Turkey's reform progress.

On the basis of this, EU leaders will decide in December whether to start EU membership negotiations with Ankara.

So was all the excitement just a storm in a tea cup?

Erdogan as an Islamic submarine

Verheugen and Erdogan were so vocal in expressing their mutual friendship that it almost seemed suspicious. On the surface, the rift between the two sides appeared mended. 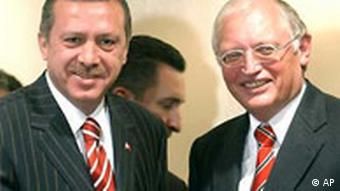 But the episode left its mark. Serious doubts are circling in Brussels about the course of Erdogan, who has turned from radical to moderate, as well as the ultra conservative members of his Justice and Development Party AKP.

The European Parliament's conservative faction even suspects that Erdogan will hold back controversial laws until EU membership negotiations actually begin next year.

Only then, when there is no turning back for the EU, will the Prime Minister show his true face and put the brakes on societal reforms: Erdogan as an Islamic submarine, so to speak.

But proponents of Turkey's membership reject this theory. There's no turning back for Turkey either, they said. Reforms have just started. Should Erdogan change his course during negotiations, he would seriously endanger EU entry.

Barroso told the French newspaper Le Monde that Turkey at present did not fulfill all the conditions for beginning membership negotiations. Turkey had to get used to European rules and not vice-versa, he said. 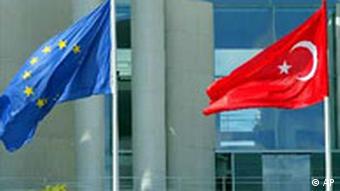 Turkey would like to see its flag permanently flying in Brussels.

Skepticism is growing. Maybe it is also Europe's fear of its own courage. Barroso said, rightly so, that Turkey's admission into the EU would be a revolutionary turning point. And EU Internal Market Commissioner Frits Bolkestein warned that Turkey could implode the old Union.

Critical remarks also came from French Prime Minister Jean-Pierre Raffarin of late. He even questioned the European capabilities of the entire Turkish society, which had not sufficiently internalized the division of Church and State, he said.

The seed of doubt

But wanting to catch up on a fundamental discussion just a few weeks before the crucial resolution is virtually impossible. The decision to accept Turkey into the EU at some point was already made back in 1999.

Now, it's just a matter of negotiating conditions and time frames.

Five years ago, the European heads of state shirked a fundamental debate on Turkey, Europe's borders, religion and culture, said Luxembourg's Prime Minister Jean-Claude Juncker, who was there at the time.

The outer peace between the EU and Turkey has been re-established after the crisis meeting in Brussels. But the seed of doubt is budding.

Many members of the Turkish-German community aren't exactly sure what Turkey's membership in the EU would mean for them personally. But that doesn't keep them from hoping it will eventually happen. (Sept. 16, 2004)

Verheugen: No More Obstacles to Talks With Turkey