Opinion: A breath of fresh air for Italy

The new Italian prime minister, Matteo Renzi, has hit the ground running. If he keeps up this furious pace, we may indeed see real changes in Italy, writes DW's Bernd Riegert. 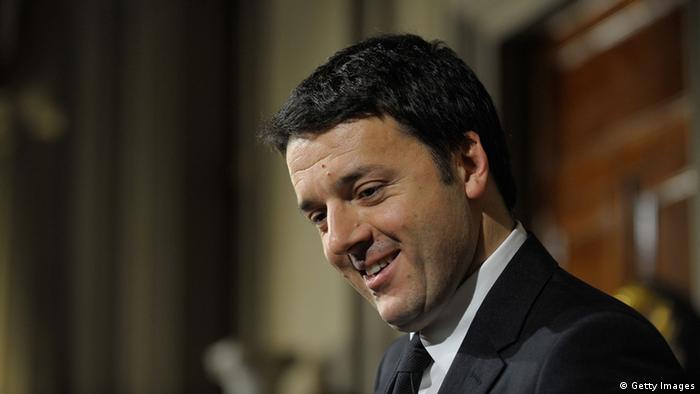 The changing of the guard in the top ranks of Italian politics has taken place at breathtaking speed. The former mayor of Florence, Matteo Renzi, who goes by the fitting nickname of "Speedy Gonzalez," only took over the reins of the center-left Democratic Party at the end of December. He promptly forced his predecessor, the incumbent prime minister, out of office, then put together a cabinet in record time. He and his colleagues were sworn in by the Italian president on Saturday (22.02.2014).

All this - and he has never actually won an election. It's the first time Italy has had a change of government by way of a coup within the ruling party. Renzi plans to govern for another four years without going to the polls, but many Italians are concerned that this means he does not have a legitimate mandate.

Renzi, who sees himself as a pragmatic politician and likes to compare himself to Britain's Tony Blair, forged a coalition with the small conservative party led by Interior Minister Angelino Alfano. This, too, happened with surprising ease. Now all the 39-year-old has to do is survive a vote of confidence in the upper and lower chambers of parliament, and then he can get to work.

His aim is to make step-by-step reforms of Italy's labor market and the taxation and justice systems. Each of Italy's last three prime ministers failed in their efforts to reform these areas. If Renzi were able to succeed, it would be truly be an unforeseen breakthrough.

Renzi has adopted the interesting strategy of involving the still-influential former prime minister Silvio Berlusconi in his deliberations. The two have met on several occasions, and Berlusconi has publicly commended his rival because he is "young and dynamic," even saying that he reminds him of himself in the good old days when it was the young Silvio who set out to reform Italy from the ground up.

It remains unclear what exactly Renzi promised Berlusconi in exchange for his help. Both politicians have said, however, that they are willing to work together to modify the complex and unjust electoral system that Berlusconi imposed upon the country years ago.

Renzi's cabinet is radically smaller - and younger - than those of his predecessors, a move that anticipates his desire to make significant changes to Italy's massive and costly state apparatus. Many of those appointed have little experience; some are technocrats with no political experience whatsoever. Renzi himself has never been active in parliament, nor has he held office at national level. However, this could be an advantage for him in his bid to "clean up" Italian politics, as he describes it: He won't have to factor existing relations into his decision making process.

The rest of Europe, meanwhile, can only hope that Renzi is able to steer Italy out of its economic crisis. The country's recovery is essential for the survival of European monetary union.

Pier Carlo Padoan, a former chief economist for the Organization for Economic Cooperation and Development (OECD), is to determine Italy's future economic policy. As finance minister, Padoan is expected to increase pressure on the eurozone and the European Central Bank to allow more sovereign debt and less stringent financial policy.

With the OECD, he pursued the American strategy of "quantitative easing" when it came to combating the financial crisis: or, in simpler terms, printing money. He represents the exact opposite of what the German finance minister, Wolfgang Schäuble, was able to push through in Brussels. If nothing else, this contrast will make for rather interesting meetings between eurozone heads in the coming months. The new dynamic will presumably be welcomed by international financial markets, which most likely won't punish Renzi's government with higher costs for government bonds - yet.

Renzi's administration will face its first test at the end of May, in the European parliamentary elections. If he succeeds in making the reforms he has announced, he may have to deal with anger from unions, public officials and pensioners - those who stand to lose from the proposed changes.

At the same time, he may attract many unemployed - and desperate - young academics to his Democratic Party. He could lúre them away from the anti-establishment "Five Star Movement" of comedian-turned-politician Beppo Grillo. At the same time, after receiving around a quarter of the vote at national elections last year, Grillo could be headed for disappointment in May.

Italy is facing tense times. Europe, for one, is hoping for a stable Italy that can overcome its financial crisis on its own. The new leader is a man of courage, vitality and energy. All he needs now is skill, and a considerable amount of luck.

Brussels hopes for normalcy in Italy

Three months before European elections, the last thing Europe needs is market uncertainty. And things are uncertain in Italy. EU officials are trying to hide their concern. (14.02.2014)

Italy's new prime minister, Matteo Renzi, and his cabinet have been sworn into office at a ceremony in Rome. The new government is the youngest in the recent Italian history. (22.02.2014)

Italy's president is meeting political party delegations to see if there is enough support for the mayor of Florence to lead a new national government. A decision could be made over the weekend. (15.02.2014)