Three people are reported to have died and thousands are without power as ex-hurricane Ophelia moves over Ireland. The storm was downgraded overnight, but authorities issued a red alert as it made landfall.

Authorities in Ireland reported the first fatality on Monday after Tropical Storm Ophelia hit the country with wind speeds reaching 176 kilometers (109 miles) per hour on the southernmost coast.

National broadcaster RTE, quoting the local council office, said a woman died in the southeast country of Waterford when a tree fell on her car as a result of the storm.

Police confirmed a man had also died in an accident while clearing a fallen tree near the town of Cahir in the south. A second man on the east coast was also killed by a tree falling onto his vehicle, police said.

Ophelia made landfall after 0940 UTC, according to the Met Eireann national weather service. 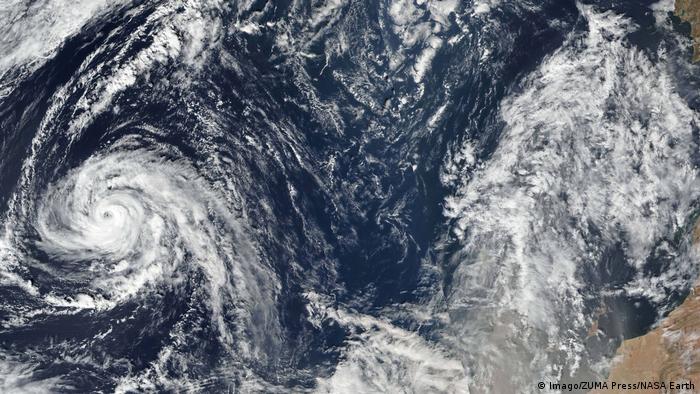 Ophelia is the 15th named storm of the 2017 Atlantic season

It warned that "heavy rain and storm surges along some coasts will result in flooding. There is a danger to life and property."

Some 210,000 homes and businesses have already been left without power. Schools and universities have shut, and airports in Dublin and Cork have cancelled many flights.

The Irish prime minister or Taoiseach, Leo Varadkar, urged people to stay indoors and to check on their neighbors and elderly relatives. "It is coming your way and this is a national red alert. Even after the storm has passed there will still be dangers. There will be trees on the ground and power lines down," he said.

Before being downgraded to a storm ahead of landfall in Ireland, Ophelia was the largest hurricane ever recorded so far east in the Atlantic Ocean and the furthest north since 1939.

The eye of Ophelia is forecast to move across Northern Ireland and then Scotland. Although it will weaken during its progress, gusts of up to 129 kilometers per hour are still expected in the UK.

Other parts of Europe have also been affected by Ophelia, which has indirectly caused unseasonably warm weather in some regions, including Germany. Wind gusts spawned by Hurricane Ophelia have also whipped wildfires in Portugual and Spain, killing dozens of people.

Ophelia - an unprecedented storm in Ireland

Ex-hurricane Ophelia has made landfall in Ireland, bringing strong winds and causing flooding, power outages and disruption to transport. Several fatalities have been reported. (16.10.2017)