The US has been on a diplomatic drive lately urging Israelis and Palestinians to sign a deal for a two-state solution before the window of opportunity closes. However, momentum is gathering pace for a one-state option. 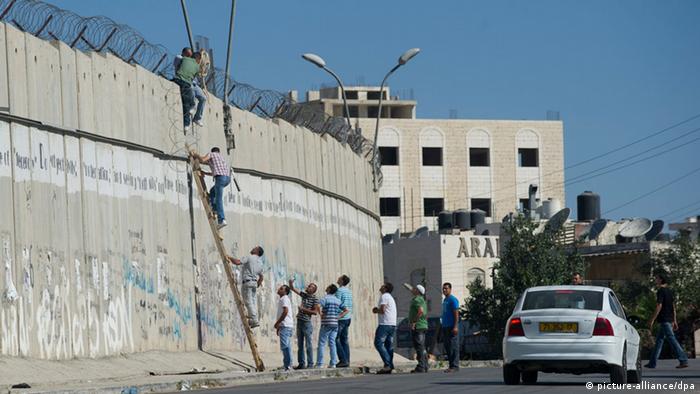 Among Palestinians, a growing group of intellectuals says the window is already shut. Even as Palestinian Authority President Mahmoud Abbas and Israeli Prime Minister Benjamin Netanyahu speak about a negotiated settlement, several dozen leading Palestinian thinkers, including former top Fatah members, say it's time to push for one state with equal rights for Israelis and Palestinians. They are joined by a handful of Israelis, who together say the commonly accepted two-state solution is dead.

Radi Jarai, a political science professor at Al-Quds University in Jerusalem, works in an office steps from the grave of the late Yasser Arafat. Jarai began as a negotiator for the Palestinians in Madrid in 1991 and most recently was a deputy minister for detainee affairs before leaving the government in 2009. Jarai said that at first he believed in the two-state solution. Even after official negotiations faltered, Jarai signed on to the Geneva Initiative, an unofficial agreement that moderate Israelis and Palestinians hoped could move their governments closer to achieving a peace deal. But in recent years, he says, he had a change of heart.

"We have had 20 years of negotiations, and every day we are farther away from the two-state solution," he told DW. "So I think the only option that can put an end to this longtime struggle is to live together."

Jarai recruited 30 colleagues in mid-May to sign the founding document of "the popular movement for one democratic state in historic Palestine" a treatise that pledges full equality for all citizens of the binational state. 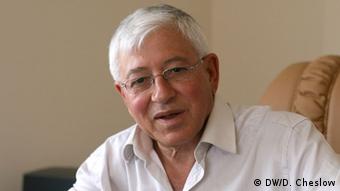 Radi Jara hopes to garner support for his one-state solution

The details are still hazy. Tel Aviv can stay, Jarai says, but the settlements have to go. The Palestinian Authority - which receives heavy Western funding and employs nearly a quarter of all Palestinian workers - would be dissolved, replaced by one government for both peoples. Palestinians living in refugee camps across the Middle East and in countries across the world would have a chance to claim citizenship in the same way Jews have been granted automatic Israeli citizenship for the last six decades. So far, 40 people have signed, he said, and he is gathering new signatures in frequent roundtable discussions in Ramallah.

"The other week, I heard [new Israeli Finance Minister Yair] Lapir say to the New York Times that they will not stop building new settlements in the West Bank, and they will not cut off financial subsidies to the settlers. It means the Israelis don't want a two-state solution," Jarai said. "There are no people who support the two-state solution and can defend that opinion in front of the Palestinian people anymore."

Jarai's idea flies in the face of the common wisdom in the region. Until his resignation in April, Prime Minister Salam Fayyad spearheaded efforts to build all the institutions of a future Palestinian state. US Secretary of State John Kerry recently unveiled a $4 billion infusion to boost the Palestinian economy. But underneath the official statements is another current of thought, questioning the peace process.

"Most Palestinians have now reached the conclusion that the two-state solution is not practical even though they support it in principle, and their expectations have changed," Shikaki said.

All the same, few Palestinians would want to dissolve the Palestinian Authority, seen as a major employer and as a national achievement. Without support for a one-state solution from leaders in moderate Fatah or Islamic Hamas, Shikaki said he doubted the movement would get far.

In Manara Square, the main traffic circle of downtown Ramallah, Palestinians had mixed feelings about a one-state solution. Flower seller Rami Alkurdi said the one-state solution could be a good idea. "I would go to the sea," he said. "Life would be better." 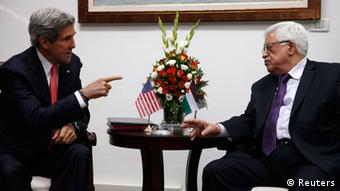 "We cannot as Palestinians admit…that we are ok with bringing Israel and Palestine into one country," Aslan said. "We have this idea that this land is ours."

"I can temporarily accept two states, but Jews must go back from where they came. I don't know why they came here and pretend they have rights to the land."

In Israel, the idea of a one-state solution is still unpopular. Its main supporters are a handful of fringe liberals. Hawkish Israeli proponents of the one-state solution hope to annex the West Bank and Gaza Strip rather than remove settlements.

Many pundits say the two-state solution is dead in the water. "Forget it. West of the Jordan, there will not be two sovereign states. This argument is molded over. Forty-six years have passed, the argument is the same and the reality has changed completely," former Jerusalem deputy mayor and noted liberal Israeli historian Meron Benvenisti said recently on Israeli TV.

One telling sign of the increasing disdain for the two-state solution could be in the reactions to Israeli President Shimon Peres who spoke in Jordan in late May urging both sides to sign an agreement before it is too late.

For now, political scientist Jarai is hoping to gather more supporters in the West Bank and the Palestinian Diaspora and eventually launch a widespread movement that would also capture the hearts and minds of Israelis.

"Why should the Israelis want an apartheid regime and want to reject the existence of the Palestinians that were here before the creation of Israel?" Jarai asked. "And as the Palestinian people, where would we go? We have no other choices. So I think we should address the Israeli public and the Jewish public and explain to them that this is the only solution to put an end to this struggle forever."

The Israeli-Palestinian conflict has been decoded. Both sides and the US know exactly what it takes to solve it. Now it is time for Barack Obama to show that he is not just going through the motions again. (30.04.2013)

Israeli troops have fired upon the Gaza Strip for the first time since November in retaliation for an attack from the Palestinian territories. It appears that Hamas is struggling to control splinter groups. (04.04.2013)