One of Last Remaining Chunks of Berlin Wall Disappears | Germany| News and in-depth reporting from Berlin and beyond | DW | 11.04.2007

Berliners woke up over Easter weekend to find a giant piece of the Berlin wall was missing. But it seems the 18m long strip of wall wasn't nicked by souvenir hunters, it was hoisted off by the Berlin government. 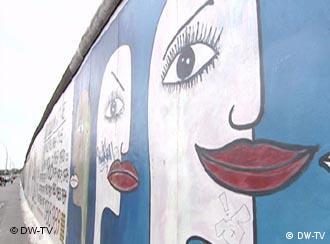 Erich Stanke, who said he bought the chunk of wall back in 1990 from a border guard, is more than peeved. He described the government's action as a "cloak and dagger" affair.

"People were shot here, and now this piece of human world heritage has simply been ripped up," he said. "It's a disgrace."

Stanke has lodged a complaint with the police because the contractors who removed the wall from Potsdamer Platz bored two holes in order to yank it out.

"The wall is a protected monument and now it's damaged," Stanke said.

Camera touting tourists regularly visited the piece of wall, which was brightly painted with graffiti and murals, such as a Trabant, a typical East German car, bursting through the wall. Another mural carries the slogan "don't destroy history" -- a reference to attempts to preserve the Berlin wall.

The Federal Office for Building and Regional Planning, who ordered the chunk's removal, doesn't know what all the fuss is about. 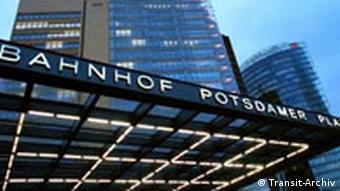 Potsdamer Platz is now famous for its modern architecture

"It's been common knowledge for quite some time" that piece would have to make way for a new environment office building, spokesperson Andreas Kübler told the Berliner Zeitung.

According to Kübler, contrary to Stanke's claims, the city owned the piece of wall. Once the project is completed at the end of 2008, the strip of wall will be on display inside the building and tourists will still be able to see it through a window.

But the exchange of words over this one piece of wall is part of a much bigger debate. For some Berliners, the wall is a despised symbol of a totalitarian regime and should be completely destroyed. For others, it's a cultural artifact that should be kept for future generations. 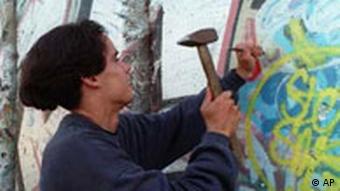 Only a few pieces of the Berlin wall survived opening up of Eastern Germany on November 19, 1989 and the resulting souvenir-hunting frenzy. Five months after the event, there were only six sections in the inner-city left standing.

Several of these remnants were in Potsdamer Platz, which lies in the center of Berlin. In the 1990s, the square underwent a massive rebuilding campaign -- and in 1999 of chunks of wall were removed to make way for glittering modern skyscrapers.

Now, a rather inconspicuous line of cobblestone set in the pavement is otherwise the only mark of the former barrier between East and West Germany.

The Berlin Wall's Checkpoint Charlie border crossing came to symbolize the Cold War divide. Now, it is home to a memorial of the division of Berlin, putting a face on those who risked their lives to leave communism. (13.08.2006)