One man's dust is another man's treasure

In the air, on the TV screen, in the closet: Dust gets everywhere. While most people consider it a nuisance, apparently it can also be a passion. In Cologne, one man collects dust like a cultural treasure. 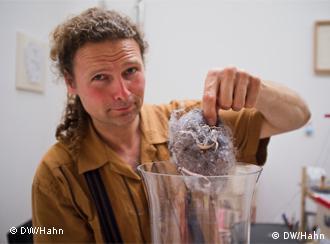 Wolfgang Stöcker stands barefoot in his loft in Cologne and sweeps some dust off his wooden desk with a paint-brush. He is an artist and a passionate dust collector.

"Some think I am crazy, of course. But dust is more than just dust," he said. "Dust reflects on time and vanity. It's a symbol of the flow of time and a meditation about our past passing away."

Dust from around the world

Wolfgang Stöcker was so passionate about the significance of those tiny particles, that in 2004 he created the German Dust Archive - a unique collection of 300 samples. The archive has since become a serious art project, though Stöcker admits that it originally started as a joke. 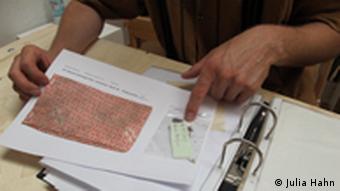 It started as a joke - but became something more

"I was very curious about what would happen when I wrote a letter to the director of a museum or a cathedral asking for a sample of their dust. And it was really funny to watch the reactions," Stöcker said, leaning back on his swivel chair, smiling. He is two meters tall and wears his curly long hair in a ponytail.

Stöcker says that most people were skeptical at first and many of his letters remained unanswered. Nevertheless, he received samples from all over Europe, and even from Asia.

The 42-years-old artist keeps his unique collection in little plastic bags attached to pages of a folder. Each one is archived according to a number and the date of collection. There are six categories: sacred dust from religious buildings, cultural dust from museums, political dust, musical dust, natural dust from special parks, and culinary dust from well-known wineries.

The latter is a category that Stöcker just recently added. He thinks that wine bottles are one of the few places where dust actually has a social value and is even considered a sign of quality.

Wall of China in a plastic bag

Does the artist have a favorite sample? "I like them all," he said with a laugh. "The Sydney Opera House is really fine. There are some remains of costumes in it, even some remains of plants."

A few pages on in his notebook, the artist points to one of his special treasures: "This is the Wall of China! It's brilliant to have it."

Stöcker's sample, collected in 2008, just looks like a few stones mixed with grey particles. The archivist got these remnants of the Wall of China from one of his "dust-scouts." He has about 20 scouts, mostly friends, who send him dust samples from their travels. Many of them share Stöcker's passion. 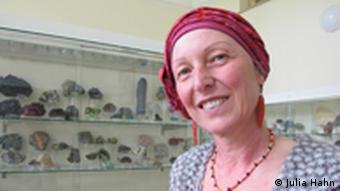 The artist will display his collection in November as part of a larger exhibition on dust, co-organized by Renate Schumacher, head of the Mineralogical Museum in Bonn.

Schumacher is particularly familiar with dust and, as part of her work, analyzes samples with a type of x-ray-machine called a diffractrometer. A software program then creates a diagram that reveals the makeup of the dust. For the exhibition, she also had a closer look at some of Wolfgang Stöcker's dusty treasures, including the Wall of China sample.

"The minerals we detected with this machine were just ordinary quartz and I think maybe a little calcite, but that's nothing exotic. The locality is exotic, but not the minerals," Schumacher explained.

The Cologne Cathedral, on the other hand, offered a real surprise. Besides ordinary minerals, the dust from Colgne's historic landmark also contained sand from the Sahara that had been blown all the way to Germany.

Meanwhile, artist and dust collector Wolfgang Stöcker has political ambitions. "It is really difficult to get dust from politicians. I don't know why," he commented, saying that he had written numerous letters to the office of German Chancellor Angela Merkel, but to no avail.

The office of the Federal President replied to his unusual request, but claimed that it was so clean that it would be impossible to find any dust to send him. Wolfgang Stöcker hopes that the Americans will be a little more relaxed about their dust. "Currently, I am fighting with the White House in Washington, DC and hopefully I will get some material," he said 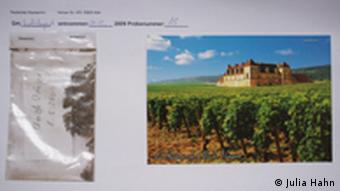 Stöcker carefully labels each item in his dust archive

Standing on his tiptoes, Stöcker takes a glass bowl down from a wooden cupboard in his office. That's where he keeps his latest masterpiece: a super-sized dust bunny.

"That's the classic form of dust," he explained, "And I am collecting them all over in my apartment. I put them in the glass and it just grows and grows and grows!"

Now, he just needs to convince the visitors of his upcoming exhibition that this melon-sized puff of dust has nothing to do with the effectiveness of the museum cleaning crew.

Rare English stamps worth millions on show in Berlin

For well over a century, the small number of extremely rare Mauritius Blue stamps have remained under lock and key in collections across the globe. A new exhibition in Berlin brings together 18 examples of the stamps. (06.09.2011)

A milestone Berlin exhibition examines the rebirth of portraiture in the 15th century. The faces shown offer glimpses into the great personalities of an era, from the inquisitive and shy to the daring and smug. (25.08.2011)

The story of Peter Pan has enthralled millions of children the world over since JM Barrie penned the classic in 1904. But the house which inspired the fantasy adventure came close to being lost forever. (15.08.2011)