For those out of work, the government has introduced a new category of low-paying jobs to supplement welfare. So-called one-euro jobs are supposed to help the long-term unemployed back into the work force. But will they? 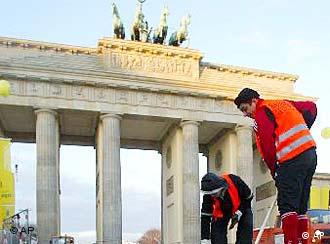 The demand was huge. A week after the Berlin employment agency pro futura began offering one-euro jobs to their clients, they were gone.

That was back in the beginning of October, and project coordinator Klaus Härtl says they still have a waiting list of more than 700 wanting to take advantage of the short-term government-mandated jobs in elderly homes, schools, and parks.

"The people come out of their homes, they make new contacts, they can communicate," said Härtle, trying to explain the attraction of part-time work to the unemployed. "They feel needed."

For the time being, he says, all 155 slots of the part-time work program are filled, but that will change. People can only work the jobs, handed out by federal employment agencies on a regional basis, for a three to six-month basis. The program is part of Germany's grander plans to reform its generous social welfare system, and encourage the estimated 1.6 million Germans out of work for more than a year to take the first step back into the work force.

From €1 to full time

"They want to make these one-euro jobs as financially unattractive as possible," said Viktor Steiner, an economist at the German Institute for Economic Research. The idea is to eventually "move people from these one euro jobs into the regular work force," he said.

For decades, Germany's unemployed were often better off receiving government unemployment and welfare checks than entering a low-level job where they would be required to pay health and unemployment insurance out of the meager checks they received each month. But with 4.25 million Germans out of work, according to November figures released Thursday, and receiving benefits, the country's public debt is reaching astronomical figures.

To keep the system from collapsing the government last year agreed on a set of reforms that would trim down Germany's generous welfare system and cut payments to those who don't take on work. 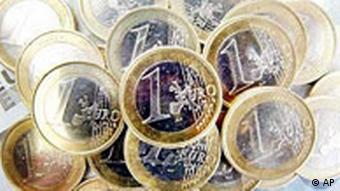 One of these per hour of work

Officials hope the one-euro jobs are the incentive jobless need to get back in the work force. At the moment, there are 19,500 being offered through the Federal Labor Office. German Economics Minister Wolfgang Clement said that number will eventually increase to 600,000.

The jobs are intended to top up the welfare checks they already get each month, but not as regular work. Participants are only allowed to work from 15 to 30 hours a week, and for no longer than three months to six months. At a rate of around €1 ($1.33) to €3 an hour, they earn a maximum of €180 each month to supplement their government aid.

For the time being, they are voluntary. But when Jan. 1 rolls around, those out of work will begin facing cuts in their unemployment checks if they don't take on available jobs. For them, the one-euro jobs might be a good transition, according to officials and organizations like pro futura.

"I think that's a bit optimistic," Steiner said. As long as people receive their welfare checks, and a bit on top from their one-euro job, they earn more than they would in a regular job that requires them to pay unemployment and health insurance, he added.

"The question is if they succeed in landing a job that will give them enough of an income," to get off welfare, he said.

The path to that job often begins with getting up off the couch and working, even just part time, helping school children read or cleaning up garbage in the park, Härtl said.

"The people who don't have a chance in the regular labor force can get a foothold there by working a job like this," he added. "They make contacts through these jobs that can lead to something later."

Germany's social insurance system is one of the most generous in the world and boasts both a long history and extended expansion course. But its long upward arc is changing direction. (Aug. 13, 2004)

With the depressed labor market showing no signs of an upturn, jobless Germans are now taking matters into their hands -- by seeking their fortunes overseas and turning to self-employment. (March 16, 2004)

Amid continuing protests over benefit cuts, Chancellor Schröder has sharply criticized his countrymen who he says take more than their fair share of state allowances. The comments have raised the ire of social groups. (Sept. 18, 2004)