On the Spot: Milivoje Novakovic

Novakovic joined Cologne when they were still in the second division. His critics then said, that he doesn't have the talent for more. Today he captains the side which has stabilized its position in the Bundesliga. 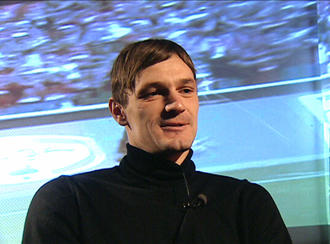 Novakovic as Skipper of FC Cologne.

Twenty-nine year old Milivoje Novakovic was born in Lubljana. In addition to his duties at Cologne, the striker also plays up front for Slovenia's national team. This is his first season in the top-flight. We met up with "Super-Nova" to find out what makes him a great striker.

Fortunately I managed to avoid injury for a very long time, and that gave me strength. And of course, when you work a lot and work hard, then at some point you reap the rewards in life.

Modesty from a 1 meter 92 athlete who can score with his head and with both feet. With twelve goals so far this season, Novakovic is one of the league's top strikers.

You played in the lower leagues in Austria and Bulgaria before joining the Bundesliga. Is it a dream come true for you?

Of course, it's a dream to play in one of the world's top five leagues. I had a great season in Bulgaria, and I joined my national team -- that's why the offers came. I decided to come to Cologne. The Bundesliga is a good challenge for me.

Had you heard of Cologne?

Sure -- I knew about all the teams in the Bundesliga. Professional players follow all the leagues, and of course I knew that it was a big club with a new stadium and a lot of fans.

Even if the fans USED to have more to cheer about. Like the German title in 1964, and again in 78. After that..

...things quieted down. The low point was when the club was relegated in 1998. Since then its been a rollercoaster ride between top flight and second division. Now under coach Christoph Daum, Cologne has some respectable mid-table results.

Is there anything remarkable about Christoph Daum that strikes you?

No. Everyone knows he's a great trainer whose had great success. There's not much to say.

"Sometimes it's enough for me to just look at someone. I infect them with a glance, with my gestures -- and it brings the desired results. I think we only speak one language, and that's the language of success."

Unfortunately, Daum and Novakovic didn't see eye-to-eye when the striker first arrived in Cologne. More than once, "Nova" got sent to the stands.

At first it was a little tough. It isn't much fun for a player to get sent to the stands. It makes you hate the coach, but that's normal. He was trying to me wake up, and it worked. I'm behind the coach one hundred per cent, just as he and the rest of the team stand behind me. You have to have trust. And we have that here now.

You've now become a team star. In the last few years you seem to have changed considerably. Does success make you grow up?

Not at all. I think you always have to keep your feet on the ground. I don't feel like a star, but I also know that I am very important to this team.

I scored twenty goals in the second division before we got promoted. Then I was made captain, which is very important to me -- and you can see that people are behind me. As a foreigner you always have to give more than others do, and fortunately I was rewarded for that work.

It certainly paid off in the team's last season in the second division, when "Nova" and Patrick Helmes scored a total of 37 goals. Cologne's two-pronged attack was unstoppable.

Helmes moved on to Leverkusen -- but next season prodigal son Lukas Podolski returns to the city on the Rhine.

You and Patrick Helmes were the dream team in the second division. Do you think you can find the same magic with Lukas Podolski?

We would have been a great trio. Podolski and I will have to learn to work together, but I know he'll be impressive. And I'm sure we'll get along.

Even so -- don't you think that the contract with Podolski was a very risky move on the part of the club?

Because it won't leave enough money to buy in other players.

No, I don't think so. When he comes, more and more money will flow into the club's coffers -- for example from new sponsors. He'll be an icon here, and that means a good time is beginning.

You obviously feel very happy at Cologne. I read once that you said you would like to become an FC Cologne legend...

Well, to be a legend in a city like this one would be a beautiful thing. There haven't been any legends here for a while. There was Podolski and Toni Polster, but that was a while ago. It would be something to be proud of, but I don't decide it. Others do.

Who's your favorite Cologne legend?

For me personally it's Löhr. He scored so many goals and achieved so much.

Do you know how many he scored?

Sure it's doable -- how many do you have?