On the Spot: Heiko Westermann

Heiko Westermann is 26 and was born and bred in Bavaria. He's won ten caps for Germany and judging by his current form, there'll be plenty more to come. One of his greatest assets is his versatility. 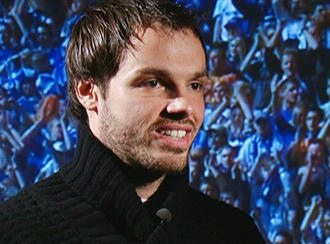 Even though he's never played as a striker, he's Schalke's second-best goalscorer this season. Originally brought in as a central defender, he's also played on the left and the right. At the moment, he's being deployed in central and defensive midfield.

Is it an advantage to be so versatile?

For the team it's very good when there's a player that can play all positions. On the other hand you can't be expected to play one position one week and another the next and always put in a top performance – that’s very difficult.

You said you prefer to play central defense...

Yes I do...because I play most stable there. If I play there several games in a row, I can play to my full potential without a dip in performance.

That's highly unlikely for a player as consistent as Heiko Westermann. At age 17, he played for second-division Greuther Fürth. Five years later he moved to Bielefeld. In 2007 he signed for Schalke and broke into the Germany team at 25.

Is your success due to hard work or talent?

There are players that are more talented than I am. No doubt about it. But I've never let that get me down. I've always been aware of my strengths and have tried to work on them. I'm still doing that today. I'm also working on my weaknesses. The important thing is to focus on improving your strengths.

I'd say it's about 70 percent hard work and 30 percent talent.

That's enough to make it in football?

Yes it's enough to do a lot in football. If you really want it you can achieve a lot of things.

If only the same could be said for Schalke. They waste chances by the bucketload; have put in some dismal performances; and have failed to deliver on their supporters' high expectations.

Your coach has been jeered. The commercial manager was fired. Some players have been booed. How's the team coping?

If you look at the last few games – we haven't played outstanding football. It was impossible because we lack the confidence other teams have. It's very, very difficult. A slight rift has opened up between us and the fans. We didn't applaud them after the last game because we were leading 1:0 and they started chanting for the coach to be fired. We can't tolerate that as a team because that's our coach. We're in a crisis – a sporting crisis – and we're not denying that. We're also not denying that we're playing poorly. But when we start to win games we'll start playing better football again.

Do you think there are player deficiencies? Kevin Kuranyi is often singled out for criticism.

Yes a lot of anger has been directed at him. But he doesn't play alone – that's clear. And he has missed a few chances – that's also clear. But he can't be blamed for everything. You can't make him responsible for our failings.

If Kevin represents the crisis does Heiko Westermann represent success at Schalke?

I hope ultimately the whole team will represent success. The season isn't over yet. We're still right in the thick of it. We want a European spot and that would go a long way to salvaging the season for us.

Is there any one player at the moment who stands out and is driving the team on?

There's a few players, some of the older ones like Marcelo Bordon or Mladen Krstajic. More recently there's been Jermaine Jones who's made huge strides. He works really hard and plays at full throttle for 90 minutes. Those are the players the rest of the team should look toward and maybe that would get us back on track.

Do your take your work worries home with you?

It depends. When we lose at weekends then I'm normally down for a day and I don't want to talk to anyone about football. I just want to have my peace and quiet that's all.

You've also been working hard off the pitch. You've been visiting a kinetics specialist...

Yes it's special training where you have to be totally focused for an hour. You work a lot with your brain and you're exhausted afterwards. It's basically stress-resistance training. If you're subject to a lot of stress in a short period of time, it helps you get an overview of the situation and not get hectic when the heat's on.

How does a movement specialist help you reduce stress?

The aim is to do several things at once using your mind, your legs and your feet.

Do you do anything else to become a better footballer?

Yes I try to make it part of my life. I'm not preaching to anyone but I try to eat healthily and get plenty of sleep.