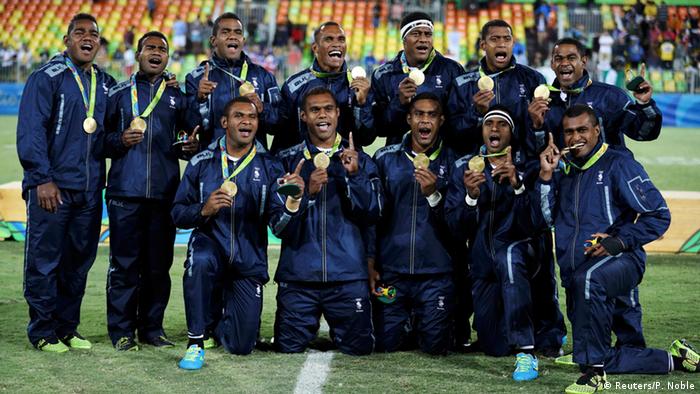 Fiji's crushing defeat of Great Britain in the final of the rugby sevens heralded the first ever Olympic medal for the tiny South Pacific island.

Britain had no answer to Fiji's breathtaking display of power rugby, which saw them run out 43-7 winners, and the first ever winners of a rugby event at the Olympics.

Their mission complete, the Fijian players, many of them in tears, linked arms in a circle on the halfway line and sang together with eyes raised up to the dark skies above.

Gymnastics sensation Simone Biles clinched her second gold medal of the Rio Olympics on Thursday, delivering a one-two finish for the United States in the all-around competition together with Alexandra Raisman.

Biles, 19, is competing in her first Games, but has won a record 10 gold medals at world championships and is already being touted by some as the greatest female gymnast ever.

After a slow start in Rio, the German Olympic team have kicked into gear and shot up to ninth in the medal table after a thrilling Thursday in the men's and women's rowing, and success in women's shooting.

First, the German men defended their 2012 title, leading from the front to register a time of 6 minutes 6.81 seconds and hold off a late challenge from silver medalists Australia to win, with Estonia claiming bronze.

Shortly after that, Ann-Katrin Thiele, Carina Bär, Julia Lier and Lisa Schmidla followed suit, improving on the country's silver medal in the event at the London Games.

A little later at the Olympic Shooting Centre, German shooting Barbara Engleder fell to her knees and screamed with delight as she celebrated gold in what will be remembered as one of the enduring images of the Olympics.

Engleder held her nerve to win in the 50m 3 Positions shooting event, just ahead of Chinese duo Zhang Binbin and 2008 champion Du Li.

Engleder's win is the first Olympic gold won by a German shooter since Silvia Sperber in Seoul, 1988 and Engleder was delighted with the victory: "It is the crowning moment of my career," she said afterwards. "I'm really, really happy."

Britain won a third straight men's team sprint cycling gold and the nation's women's pursuit team set a world record in qualifying as the top nation in track cycling had a superb start in Rio.

Another Briton, Bradley Wiggins, started his quest for a national record eighth Olympic medal as part of the men's pursuit team which also dominated qualifying.

Golf made its return to the Olympic stage on Thursday after a 112-year hiatus, with Adilson da Silva of Brazil hitting the first Olympic golf shot since 1904 with the opening tee shot. 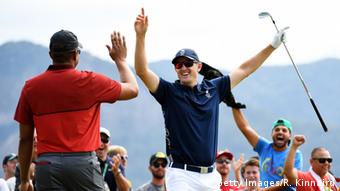 Britain's Justin Rose celebrates a hole-in-one ont he day golf returned to the Olympics for the first time since 1904.

On a day that saw a hole-in-one from Britain's Justin Rose, Australia's Marcus Fraser secured the first-round lead with an 8-under round of 63, which was enough for a three-shot lead over Henrik Stenson of Sweden and Graham DeLaet of Canada.

The top ranked tennis player left in the men's competition, Britain's Andy Murray, fought back from 3-0 down in the deciding set against Italy's Fabio Fognini to make the last eight.

Murray, the second seed, eventually won 6-1 2-6 6-3 and is hoping to become the first player ever to defend an Olympic singles title. He will now face 12th seeded American Steve Johnson.

"You have to totally change your technique and your strokes and it throws off your rhythm, your timing," said Murray who hit 48 unforced errors in the swirling conditions.

Juan Martin del Potro, who put out world number one Novak Djokovic in the first round, made the last-eight with a 6-7 (4/7), 6-1, 6-2 win over Taro Daniel of Japan to set up a quarter-final with Spain's Roberto Bautista Agut.

China's Ma Long overwhelmed his teammate and defending champion Zhang Jike with a 4-0 win to seize gold in the men's table tennis singles final on Thursday, with Japan's Jun Mizutani claiming the bronze. 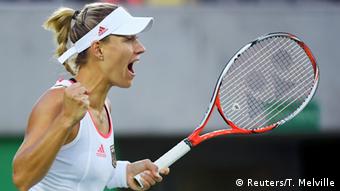 Ma, the world number one, capitalized on Zhang's mistakes and misses to triumph 14-12, 11-5, 11-4 and 11-4 after thrilling the cheering fans with a high-speed game of rapid-fire spins and quick reflexes.

The Olympic medal was the only table tennis accolade that has eluded Ma, who failed to make the Chinese team in London four years ago due to a series of unexpected losses during the qualifiers, despite being world number one at the time.

The remarkable Olympics career of Michael Phelps just keeps on getting better.

Two days after securing double gold in the pool in the 200m butterfly and 4x200 freestyle, the American lined up against his great rival and compatriot Ryan Lochte in the 200m individual medley.

Although it wasn't Lochte who proved to be Phelps's greatest challenge in the race, with Japan's Kosuke Hagino pushing Phelps hardest.

But as soon as Phelps hit his stride in the third leg of the medley, the breaststroke, he was clear of the field, and simply pulled away with a devastating freestyle leg to finish in a time of 1:54.66 to claim a stunning 22nd career Olympic gold medal.

Earlier in the pool, American Ryan Murphy completed a backstroke double, adding the Olympic men's 200m gold to the 100 title he won earlier in the week.

Japan's Rie Kaneto won the Olympic gold medal in the women's 200m breaststroke on Thursday, edging out controversial Russian Yulia Efimova who won her second silver of the Games.

Simone Manuel and Penny Oleksiak clocked in at 52.70 in the Women's 100m Freestyle Final. Canadian Oleksiak is just 16 years of age, while the American Manuel is the first African-American women to win individual swimming gold for Team USA, and the first black female swimmer to win gold in the pool.