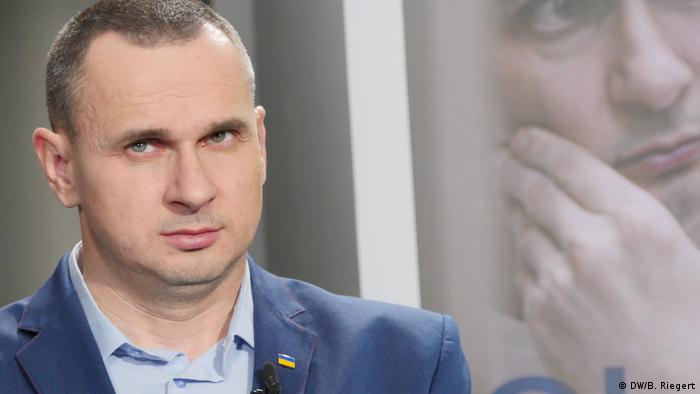 Oleg Sentsov was not present during the filming of his latest movie. At the time, the Ukrainian director was still in prison in Russia.

Friends of his had the idea of turning one of his plays into a film, Sentsov says in an interview. They found a producer and got started, always hoping, he says, "that I would be released to direct the film." He was not released, so he asked Akhtem Seitablayev, a fellow Ukrainian filmmaker, to help out. "We put together the whole crew and the set, but of course the shooting took place without me."

The film team developed the movie in close cooperation with the imprisoned filmmaker, communicating via e-mail, sending him pictures, letters and ideas. Numbers premiered at the Maxim Gorki Theater in Berlin just days ahead of the start of this year's Berlin Film Festival.

The film is about a group of people who live in a totalitarian system. The characters have no names, only numbers. They live by strict rules: They only eat while everyone is running around a ping pong table. Men and women are separated at night. A figure zero keeps watch from above.  After a while, a few people begin to rebel.

Clearly, the film refers to the strict agenda in a Siberian prison camp or in Russian prisons. 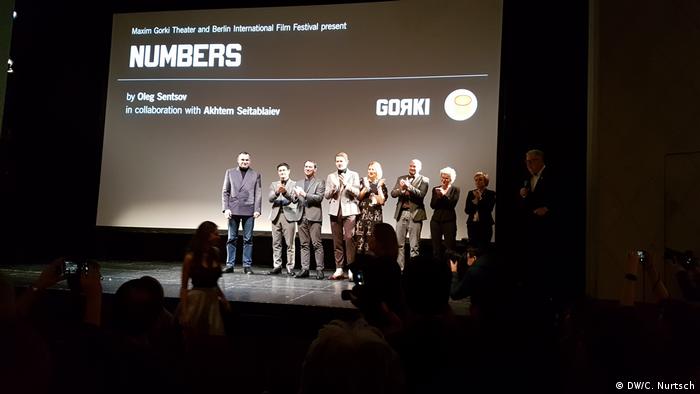 It's a social allegory that could take place anywhere in the world, Sentsov argues. "The play is not only about Russia. It's not the only totalitarian country in the world," he says. "I think it's a universal play. It's about the universal theme of a self-contained society. It could be any society."

He wrote the play 10 years ago, says Sentsov — inspired by a sporting event on television. "My ex-wife used to love to watch biathlon and sometimes I would watch with her," he recalls. "I had the idea to have the play take place in this biathlon environment."

"Because that is completely absurd, it took me years to start writing, but the idea stayed with me so the actual writing took only a few days."

The film is a parody of today's society, the Ukrainian director told the audience at the premiere at the Maxim Gorki Theater. In 2015 he was sentenced to 20 years in prison in a controversial trial in Russia, for allegedly having planned terrorist attacks. Artists, directors, politicians and filmmakers worldwide campaigned for his release. In September 2019, Sentsov was surprisingly released during a prisoner swap between Russia and Ukraine. 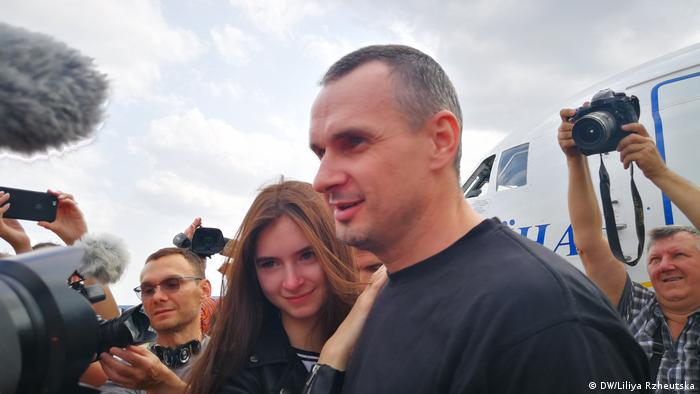 September 2019: Sentsov was released through a prisoner exchange

Numbers at the Berlinale

The film Numbers is running in the Special section of the Berlin International Film Festival, which opens on Thursday. It is a traditional venue for politically ambitious films.

For Oleg Sentsov, the film festival is a good opportunity to meet with international filmmakers and speak to the audience. He will no longer let anyone tell him to shut up, he says. "When I meet politicians in Europe, of course I talk to them about Ukrainian prisoners, but I also support Russian prisoners," he says. "There is this person called Putin and I support anyone who stands up against him."

"I know the situation these prisoners are in," Sentsov says.