Oktoberfest turns 200: a journey through its history

What started as a horse race at a royal wedding has become one of the world's best known folk festivals. Find out about Oktoberfest's origins and how it developed over time. 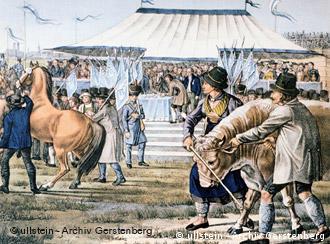 A 19th-century lithograph shows a scene from the first Oktoberfest

It all started with a wedding. On October 12, 1810, Bavarian crown prince Ludwig I married Saxon princess Therese of Saxe-Hildburghausen. To pep up the ceremony, a horse race was proposed and a race track built.

Charging horses weren't the only spectacle at the ceremony, though. Munich came alive with music and decorations, and the rich feast provided by Bavaria's future king prompted archivists to describe the event as a full-scale folk festival.

The horse race followed about a week later and drew 30,000 spectators. Visitors could catch a glimpse of the nobility, who entered in an elegant procession and went to a separate pavilion from where they would watch the race. They were followed by another procession of 16 pairs of children wearing the traditional attire associated with various regions in Bavaria. Each pair paid homage to Ludwig I and his wife.

The festivities also served as a kind of image campaign for Ludwig I. Napoleon had granted Ludwig's father rule of Bavaria just four years prior, and there were still many foreign influences in the region which worried the nobility. The wedding and revelry were a way to strengthen solidarity in the region.

That may explain why similar celebrations took place the next year and onward. By 1819, the event was declared an annual festival. Today's Oktoberfest takes place on the grounds where the original horse race was held.

From horse race to the 'big bang'

Well into the 19th century, Oktoberfest was much more about the king's solidarity with the folk than a certain beverage with hops. Uncivilized behavior was left to the many animals at the event, including the racehorses, prize-winning bulls and rams, and the soon-to-be-plucked game that served as targets for the marksmen. 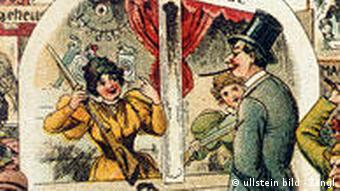 The first few carousels and swings appeared in 1818. By the late 1830's, beer and fish stands were on the lawn, but there were still few attractions and merchants. Even in 1881, records show that the festival offerings remained limited. There were 23 show booths, six rides and 12 gaming stands.

Nonetheless, the number of visitors was on the rise, with hundreds of thousands of annual guests on record in the 1880s. By then, Munich's population had increased six fold since the marriage of Ludwig I in 1810.

Oktoberfest's "big bang" came in the 1890's, along with electricity and a host of clever entrepreneurs. New rides, attractions, magic shows, menageries and wax figurine cabinets shot up all across the festival grounds. 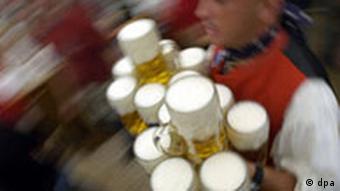 Beer became associated with Oktoberfest many years after the festival's beginning

At the end of the century, Oktoberfest still wasn't a beer fest - in fact, some songs that encouraged drinking were forbidden. But beer and sausage consumption was growing, and the festival was extended to more than 14 days.

Growth and destruction in a new century

Oktoberfest's 100th anniversary in 1910 was held with the rather exaggerated motto: "The biggest Oktoberfest of all time." But it was true that the event had grown immensely and visitors would have scarcely recognized the Munich experienced by author August Lewald in 1835: "The moon hanging in a cloudless sky, the mountain tops ringed with haze, forests lying nearby and the thousand city lights burning alongside a few from villages beyond."

In the new century, the villages grew together and crowded out the forest. The thousand lights became 10,000, powered by electricity rather than gas. Those on the Oktoberfest lawn were drowned in the lights from the Ferris wheels, carousels and increasingly competitive beer halls. 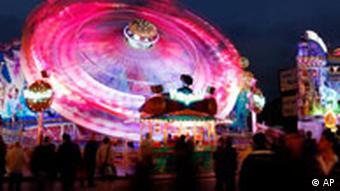 These days, Oktoberfest features a host of entertainment possibilities

The kingdom of Bavaria came to an end with the Revolution of 1918-19, and Oktoberfest brought revelers a glimpse of the "good old days" prior to the war. Though the event did without the luster of the monarchy in the 1920's, a number of other famous guests filled in. Writers like Thomas Wolfe and Bertolt Brecht made their way to Munich. Even Albert Einstein was on the festival lawn - as a young apprentice, screwing lightbulbs into the facade of the Schottenhamel tent.

Staunchly against alcohol, Hitler never appeared at Oktoberfest. He regarded the event with suspicion, just as he did Christmas. But by 1936, Nazi flags had replaced all other flags on the festival lawn, and Jewish vendors were forbidden from participating. The last Oktoberfest before the war was held in 1938 and dubbed the "Great German Folk Festival."

As Munich still lay in ruins after the war, the festival was revived - although guests were more likely to find watery beer and fish sandwiches than the hearty refreshments of the past. By the 1960's, Oktoberfest was back on its feet and growing - just in time for Munich to play host to the Olympics in 1972.

What began as a horse race and became world-famous as a celebration of all things Bavarian is now an international trademark. Since the 1980's, the festival regularly attracts more than five million visitors - even if some Munich residents prefer to just stay home during the event.

Against the joyous festival mood that defines most Oktoberfest celebrations, in 1980 tragedy struck.

On September 26, 1980, a bomb exploded at the festival gates leaving 211 injured and 13 dead, including the bomber himself. He was 21-year-old geology student Gundolf Wilfried Koehler and a member of a right-wing extremist group called the Wehrsportgruppe Hoffmann. The group had been banned shortly before the attack. 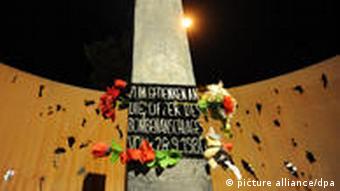 The monument to victims of the attack symbolizes protection and democracy

Authorities speculate even today about whether other people were involved in planning or executing the attack. Researchers have scoured the files of the East German secret police, or Stasi, for clues about who might have aided Koehler. The Stasi kept close records on neo-Nazi groups in West Germany.

However, the attack is still considered a lone act. A monument for the victims was erected on the festival grounds. After suffering repeated damage from revelers and vandals, the monument was redesigned in 2008. It now consists of an inscription and a stele surrounding by a steel wall bored through with holes.

"The cloak of steel is a metaphor for protection and for democracy," explained Friedrich Koller, the monument's sculptor. "The cloak was damaged, and it shows its wounds."

Those who have never attended Oktoberfest may want to familiarize themselves with some basic tenets of the Bavarian beer bash before braving the crowds in Munich each year. (06.09.2010)

Here you can find everything you need to know about visiting Oktoberfest: event dates, prices, hours for the festival grounds and tents, information on family days and news about this year's festivities. (10.09.2010)

Find out what's going on this year at Oktoberfest - besides consuming large quantities of beer. (10.09.2010)