OECD warns eurozone over debt despite its slow recovery | Europe| News and current affairs from around the continent | DW | 13.12.2010

OECD warns eurozone over debt despite its slow recovery

The OECD urged eurozone states to start cutting down their debt loads and correct economic imbalances as soon as possible. Its chief economist gave rise to the idea of joint euro bonds, calling them a "good idea". 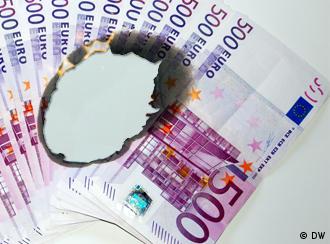 The Organization for Economic Co-Operation and Development (OECD) warned the 16 eurozone member states on Monday that they need to start cutting their heavy debt loads and adopt tough measures to correct economic imbalances.

The OECD also urged them to install a permanent crisis resolution mechanism which would force nations to carry out reforms in order to receive aid.

In its latest survey, the OECD predicted the eurozone's economy would grow by 1.7 percent this year before accelerating to 2 percent in 2011. And although the OECD said the eurozone enjoyed a "gradual and sustained recovery" from last year's steep recession, it also predicted that the pace of recovery would likely be muted.

Eurozone states should begin to cut debts by 2011 the latest

"Fiscal consolidation is the immediate priority to stabilize the public finances and should begin by 2011 at the latest in all countries," the OECD said in a statement.

OECD chief economist Pier Carlo Padoan acknowledged that it took economists like him too long to understand the underlying reasons for the euro crisis. "We economists have to plead guilty to that because we now discovered that while looking at (the) fiscal (situation) that needs to be looked at, we neglected other elements that now we know prove to be extremely important," he said.

The crisis was caused by an economic imbalance, which had always existed in Europe, he added. The common currency only served to exacerbate that fact.

According to Daniel Gros, head of the Center for European Policy Studies, one has to go back about 20 years to find the root of the current crisis. 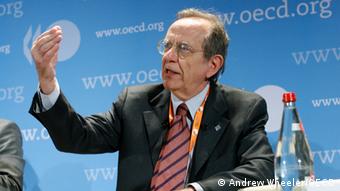 "The problems we have been experiencing at the European periphery go back to German reunification. At that time, Germany experienced a construction and consumption boom which led to a rise in interest rates, while the rest of Europe was moving in the opposite direction," he said.

"Beginning in 1995, it was Germany that had to watch its finances while other nations, thanks to the global credit boom, were spending more freely. Now the tables are turning again."

The massive public debt of practically all of the OECD's member states, is one of the main problems, said chief economist Padoan. "The first, best solution for countries is strong fiscal adjustment and decisive structural reforms to boost growth. We think this is the way forward."

However, eurozone states appear to be moving in the right direction. "The reforms we are currently witnessing in Greece and elsewhere will take effect at some point," said Gros. "The question we're asking right now is whether the financial markets will give those countries the time they need to implement the reforms. Germany had enough time. Greece may possibly not."

This is a scenario no one wants to imagine. OECD chief economist Padoan gave rise to the idea of joint euro bonds. "Imagining that there is a European dimension to financial markets, including bond markets, is a good idea," he said.

Ireland bailout reignites fears about the future of the euro

Germany has seen a number of its own currencies come and go: the deutschmark, the reichsmark and, before that, the mark. Now some analysts are grumbling that the euro may be on its way out too. (24.11.2010)

Eurozone finance ministers have signed off on a 500-billion-euro safety fund to stave off future crises within the single currency zone. The announcement comes amid concerns over the strength and stability of the euro. (07.06.2010)