Obama blocks help for Syrian rebels | World | Breaking news and perspectives from around the globe | DW | 19.02.2013

The US president is one of the biggest obstacles to helping the Syrian rebels, a recent Senate hearing revealed - to analysts and Syrian activists, Obama's policy of disengagement amounts to support for Bashar Assad. 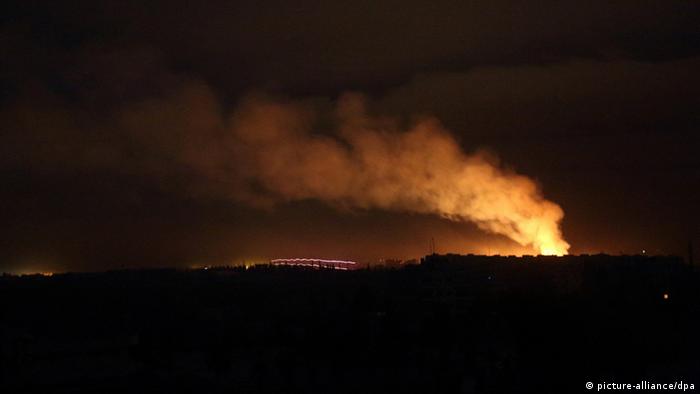 Syrian activists say that the conflict raging in their country is not a "civil war" at all - it's a massacre perpetrated by the government on its own people.

The United Nations high commissioner for human rights Navi Pillay this month put the latest death toll for the two-year conflict at "approaching 70,000" - but the relentless reports of atrocities in Aleppo and the suburbs of Damascus have done nothing to move western governments to intervene in the conflict.

Nor have the regular reports from UN bodies, such as one delivered by the Human Rights Council on Monday, calling on the UN Security Council to "act urgently to ensure accountability" for grave violations, possibly by referring the violators to the International Criminal Court for prosecution. 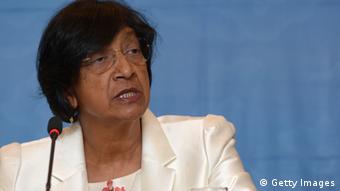 Pillay estimates that 70,000 people have now been killed in Syria since fighting began

For the Syrian activists abroad, this lack of action equals support for President Bashar Assad's brutal regime. "This is more evidence that the US administration as well as the international community is not in favour of democracy, neither is it in favour of stopping the ongoing massacre," said Ahmad, an activist who did not want to give his full name because he still has family inside Syria. "The line that the United States has taken is to support the ongoing war against the Syrian people, to reach a situation where Syria will be a weak country that will not present any danger in the future."

Just what is preventing the West's intervention in the Syrian conflict? In last two weeks, it has become clear that one significant obstacle is US President Barack Obama. At a Senate hearing on February 7, it emerged that the White House seems to have been the only department of the US government to block a proposal to arm the Syrian rebels.

At the hearing, Defense Secretary Leon Panetta and General Martin Dempsey, chairman of the Joint Chiefs of Staff both admitted that they had supported the plan - alongside the State department and the Central Intelligence Agency.

US officials reportedly came to the conclusion that providing the rebels with direct military support was the best option after June 2012, when international envoy Kofi Annan's diplomatic initiative in Syria broke down. 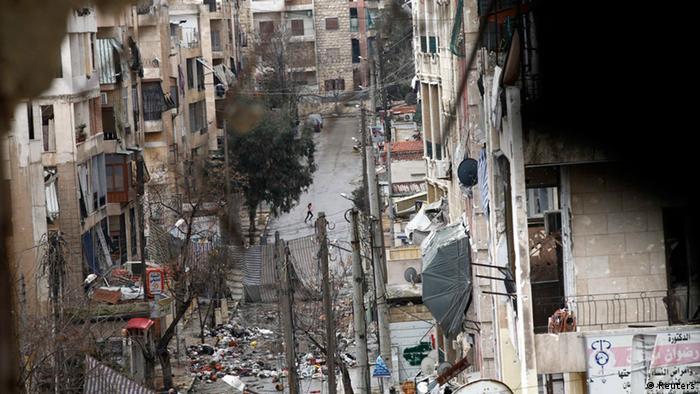 Aleppo has become the scene of many atrocities

Both Panetta and Dempsey kept their views to themselves until two weeks ago, when Senator John McCain pressed them at the hearing. "How many more have to die before you recommend military action?" McCain asked. "And did you support the recommendation by…then-Secretary of State Clinton and then-head of CIA, Mr. Petraeus, that we provide weapons to the resistance in Syria?"

Panetta replied that though he had backed the plan at the time, he also supported Obama's decision not to take up the proposal. "Obviously there were a number of factors that were involved here that ultimately led to the president's decision to make it non-lethal," Panetta said.

Nadim Shehadi, associate fellow at the Chatham House think tank, was unsurprised by the revelations. "The only thing that surprised me was that [former Secretary of State] Hillary Clinton was in favor of the plan," he told DW. "Almost everything Clinton said in the last year reinforces Assad's power, rather than weakens it."

Shehadi also believes that Obama's reluctance over Syria is fuelled by his reaction to the Iraq war. "I think what is happening in Syria is simple, and it's Washington that's complicated," he said. "What's complicated is the legacy of Bush, and the way Obama has trapped himself in a policy of disengagement from the region, in a narrative that Iraq was a disaster and a defeat for the United States. The administration has defined itself as not being Bush - Bush does isolation, intervention, and regime change - we make deals with enemies."

The result, according to Shehadi, is that Assad feels comforted by US statements. "If a statement comes out of Washington saying, 'The Pentagon has prepared plans for intervention in Syria to control chemical weapons in case Assad falls.' If I were Assad I would interpret this as a message of support," he said. "Because they are more worried about me falling than about me being there. As long as I am killing my people they don't care. They would intervene if I fall, which means they would rather I hang in there." 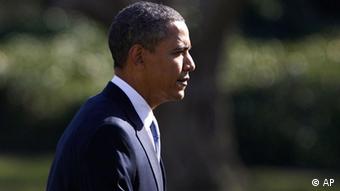 Obama says he will only support the rebels 'politically'

Post-election - cautious as ever

Ahmad also does not agree with reports, mentioned in the New York Times and the Wall Street Journal, that there is no need for the US to supply military help, because the Syrian rebels are already being armed by Gulf states. "There is some little money, if it exists, that is going to some radical parties, but at the moment there is no real help for the Free Syrian Army," Ahmad said. "Essentially they are armed with what they gain in battle from the regime."

The revelations also dashed the hopes of many Syrian opposition activists, who had speculated that winning re-election meant Obama would feel freer find a way to end the conflict. In fact, the US' cautious approach is set to continue, considering the appointments of John Kerry and Chuck Hagel as the new secretaries of state and defense respectively. Both men, unlike their predecessors, are thought to share Obama's reluctance.

Kerry, who assumed his post at the start of February, is currently visiting Europe and the Middle East and Europe. On his first stop in London on Monday he said the US administration had been looking into new ways of helping the opposition and hasten the departure of President Assad. "We are determined that the Syrian opposition is not going to be dangling in the wind wondering where the support is or if it's coming," Kerry said at a news conference in London. "And we are determined to change the calculation on the ground for President Assad."

That, however, appears unlikely to happen."I don't think Assad is open to being convinced," said Shehadi. "Assad has to be shown the way out."

The renewed EU arms embargo imposed on the warring factions in Syria is nothing if not controversial. Those opposed want to help the rebels and those in favor want to prevent an escalation of the conflict. (19.02.2013)

Is a road map for peace in Syria in sight?

The Assad regime in Syria has been fighting insurgents for the last two years, but neither side seems strong enough to defeat the other. Now, the government and the opposition appear to want to negotiate. (18.02.2013)

What began as protests to topple Syria's regime in March 2011 has developed into a civil war. The UN says nearly 70,000 people have been killed. Read DW's multimedia coverage and analysis of the conflict in Syria. (14.02.2013)