New York City police say they have blown up a second device found blocks away from the bomb blast in Manhattan. The explosion is being investigated as a potential 'act of terrorism.' 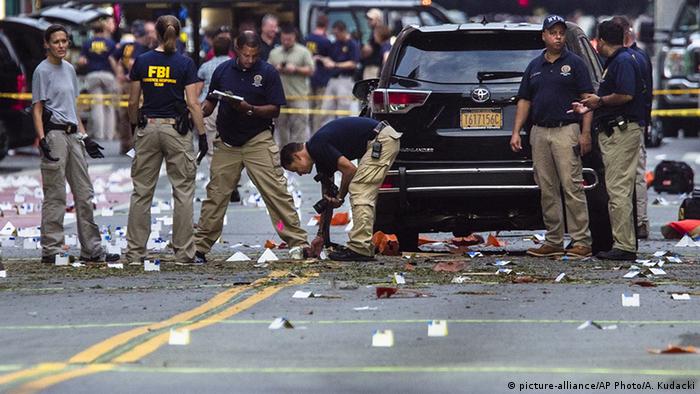 The New York Police Department confirmed on Sunday that the controlled detonation of the second device was carried out at a police facility in the Bronx earlier that evening.

A forensic examination of the device is to be conducted at the FBI Laboratory at Quantico, Virginia. A law enforcement official described it as a pressure-cooker with wires and a mobile phone attached. The same style of bomb was also used in the 2013 Boston Marathon bombing, which killed three people and wounded more than 260.

The second device was discovered on Saturday night,shortly after a bomb exploded in Manhattan's Chelsea neighborhood.

Twenty-nine people were injured in that blast; they have since been released from hospital.

Federal investigators continued on Sunday to determine whether Saturday's bomb blast was linked to two other incidents over the weekend, including a pipe bomb in New Jersey and a stabbing at a Minnesota shopping mall.

Officials have so far described all three incidents as deliberate, criminal acts, which are now being investigated as potential "acts of terrorism." The motivation behind them remains unclear.

The "Islamic State" (IS) militant group was quick to claim responsibility for the Minnesota stabbing.

New York Governor Andrew Cuomo vowed earlier on Sunday to punish those responsible for the attack.

"We will find who planted these explosives and they will be punished," he said. "We will not allow these types of people and these types of threats to disrupt our life in New York."

In light of the bombing, some 1,000 additional police officers have been deployed on to the streets of New York. The city had already been on high alert due to the United Nations (UN) General Assembly meeting on Monday, which will be attended by some 135 heads of state and government.

The Manhattan blast was caused by a bomb, but early probes have found no link to "international terrorism," New York Governor Andrew Cuomo said. Security forces were on full alert as police searched for suspects. (18.09.2016)