Number of Soldiers With Stress Disorder Going Up, Report Says | Germany | News and in-depth reporting from Berlin and beyond | DW | 03.02.2009

A film recently aired by public broadcaster ARD is helping draw attention to a little-discussed problem: the increasing number of German soldiers returning from Afghanistan with post-traumatic stress disorder. 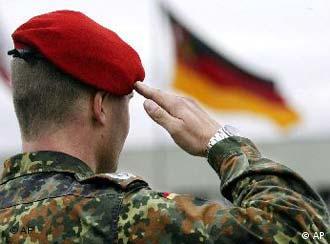 Many soldiers have difficulty re-adjusting to civilian life

The film, which aired on Monday, Feb. 2, is called "Wilkommen Zuhause" (Welcome Home). In it, director Andreas Senn tells the story of Ben, a Bundeswehr soldier who sets off for Afghanistan to participate in a humanitarian mission.

But when one of his colleagues is killed in a militant attack, Ben is no longer the same. Back home, he tries to convince his friends and family that he's fine, but even they notice the change. The sound of breaking glass is enough to send Ben hurtling to the floor in search of cover.

According to the daily Sueddeutsche Zeitung, the number of German soldiers returning from Afghanistan with post-traumatic stress disorder is on the rise. The paper reported on Tuesday that the number of known PTSD cases for Bundeswehr soldiers has risen from 55 in 2006 to 226 in 2008. Experts say that, in reality, the number of cases is likely much higher due to the cases that go unreported.

German Defense Minister Franz Josef Jung put the number of German soldiers who suffer from PTSD at 2 percent. There are currently about 3,400 Bundeswehr troops stationed in Afghanistan, where most German PTSD cases originate. A total of about 62,000 Germans have been stationed in war zones in the past three years. 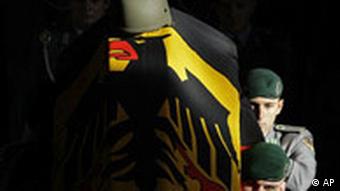 The death of a colleague can unleash PTSD

Soldiers with PTSD find it difficult to return to normal life, and end up suffering from things such as extreme irritability, depression or addiction, the paper said.

Experts say that while Germans are familiar with PTSD for a long time in firefighters or train drivers who witness suicides, it was taboo to talk about the disorder in connection with soldiers.

Now though, it appears that politicians are taking notice of the scale of the problem, and plan to address the issue in a parliamentary session next week. Among the proposals up for discussion is the establishment of a research center for PTSD, and improvements to the care that is given to soldiers returning from missions abroad.

In addition, the German armed forces association has suggested setting up a phone hotline where soldiers can speak anonymously about their symptoms. Many soldiers try to come to terms with their symptoms alone so as not to be labeled a "weakling" by their colleagues, said the chairman of the association, Lieutenant-Colonel Ulrich Kirsch.

A German soldier told Deutsche Welle about the hardships and rewards of serving in Afghanistan. Germany has about 3,500 soldiers stationed the country, where attacks remain a common occurance. (27.01.2009)

A German army general called Berlin's efforts to help Afghanistan a "failure" Friday and demanded that Berlin roll out development aid that Afghans could see. (28.11.2008)

A bomb attack on a German patrol in northern Afghanistan on Monday, Nov. 17 left four soldiers slightly injured as well as an unspecified number of Afghan civilians, the German army said (17.11.2008)

Since the Taliban seized power, many Bundeswehr soldiers have felt that their deployment in Afghanistan was in vain. Traumatized personnel are suffering particularly hard.