Army General Calls German Campaign in Afghanistan a ″Failure″ | Germany| News and in-depth reporting from Berlin and beyond | DW | 28.11.2008

A German army general called Berlin's efforts to help Afghanistan a "failure" Friday and demanded that Berlin roll out development aid that Afghans could see. 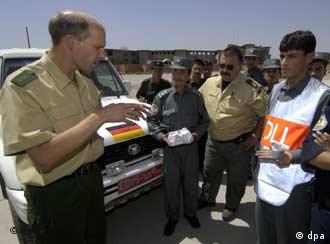 Ammon says German police training in Afghanistan was not sufficient

The outspoken criticism by Hans-Christoph Ammon, who heads the army's commando section, was almost unprecedented in modern Germany and follows months of growing discontent among soldiers at Berlin policy.

Ammon said that compared to the United States, Germany was spending "far too little" in Afghanistan. He also called on the West to open peace talks with moderate Taliban.

He confirmed his remarks to Deutsche Presse-Agentur dpa in Stuttgart, after a speech he gave Wednesday was reported in an area newspaper, the Schwaebische Zeitung.

Germany's efforts to establish a proper police force in Afghanistan "have been a failure," said Ammon, whose KSK secrecy-shrouded special forces troops were originally sent to Afghanistan to fight the Taliban and al Qaeda.

Brigadier-General Ammon said that where Washington had devoted $1 billion (776,300 euros) to developing the army and police, Germany had spent just 12 million euros ($15 million).

"It would have taken us another 82 years to obtain a reasonable police force," he told dpa. He said Berlin did too little public outreach to explain to Germans the purpose of the military deployment to Afghanistan.

A bomb attack on a German patrol in northern Afghanistan on Monday, Nov. 17 left four soldiers slightly injured as well as an unspecified number of Afghan civilians, the German army said (17.11.2008)

German troops in Afghanistan opened fire on a vehicle Friday evening when the driver failed to stop at a checkpoint. Five occupants were wounded, the defense ministry said. (27.10.2008)

Germany's lower house of parliament voted on Thursday to increase the number of troops Berlin can send to Afghanistan by 1,000 soldiers and extended the mission's mandate by 14 months. (16.10.2008)