Not Exactly the Welcome Wagon

Thousands of protesters are expected at US President George W. Bush’s inauguration. While some in Germany will hit the streets, demonstrators really want their voices to be heard during the president’s February visit. 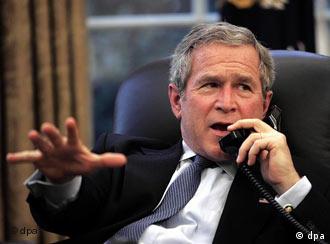 Europeans will meet US President Bush face to face next month

Candlelight vigils, street protests and a Mardi Gras-like parade are some of the events that will bring out hundreds of people in Germany to express their unhappiness with the American president at anti-inauguration activities around the country.

Want to do something positive

“We felt there would be a lot of negative feelings coming up now if we didn’t do something positive,” said Ronald Schlundt, chairman of the German chapter of Democrats Abroad, who will be attending an anti-inauguration parade in the village of Ramstein. Democrats Abroad will be holding counter-inaugural events in 24 countries around the world, Schlundt added. 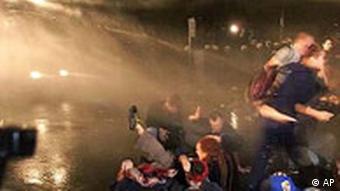 Berlin’s Brandenburg Gate is the hub of two other events. On Wednesday night, the Berlin district of Democrats Abroad held a candlelight vigil and on Thursday, the day of the inauguration, Vote X, an anti-Bush group formed before the election, and other groups critical of the Bush administration will demonstrate near the landmark with the slogan “You’ve got a Voice.”

While the inauguration tends to be big news in the US, it doesn’t generally pull in a large foreign crowd. Indeed, it’s the president’s visit on February 23 that has really grabbed Germans’ attention.

Bush has vowed to try to reach out to Europe in an effort to smooth over differences opened by the Iraq war during next month's journey through Belgium, Germany, England and Slovakia. 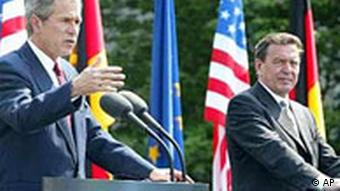 During his February visit, Bush, will meet with German Chancellor Gerhard Schröder

German protesters are hoping to make sure the president doesn’t have too easy of a time convincing Europe’s politicians that the transatlantic rift has healed. Many of those critical of the United States feel they cannot rely on the German government to express their indignation about Bush’s policies.

“It is important for people to show Bush that the path he is on is wrong and very dangerous, we cannot expect the government to do it for us,” said Peter Strutynski of Germany’s Federal Committee Peace Counsel. “They have been sending signals that they are willing to work with Washington.”

More reasons to fight on the way

Although they disagree with Bush’s politics, attac, an anti-globalization group, is not planning any protests in connection with the inauguration, but it is one of many organizations planning to call for its members to take part in demonstrations when Bush comes to Germany, spokesperson Malte Kreutzfeldt said.

The groups are hoping for a large turnout at demonstrations next month as a way of showing the world that Europe can act independently of American influence.

Keep Bush out of Berlin 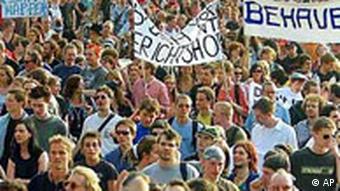 Demonstrators will have already notched up one success when Bush comes to Germany: ensuring that he is not received in the German capital. The president’s itinerary has him visiting the southern German city of Mainz.

“I think our demonstrations two years ago played a role in keeping Bush out of Berlin,” Strutynski said. “This time we want to show him that he is not welcome and that we do not want any part of his politics.”

The groups agree that even though the Democratic candidate John Kerry lost last November’s election, they will continue to fight as the opposition party.

“When I think about the election, I throw up my hands because we’re stuck with Bush,” Democrats Abroad member Eva Adams said. “But I’m not going to just roll over and take everything he wants to do.”

Americans have decided George Bush is the best man for the helm of the world's only superpower in these difficult times. While he may be the pick of US voters, the world, unfortunately, deserves better. (Nov. 4, 2004)

What Does the US Vote Mean for Germany?

A vast majority of Europeans are hoping for a change in the White House after the US election. But while John Kerry is the candidate of choice, would a Democratic administration be the best thing for US-German relations? (Nov. 2, 2004)

Foreign governments traditionally remain neutral during US election campaigns, but this year several leaders and governments around the world are either directly or implicitly supporting George Bush or John Kerry. (Nov. 1, 2004)