Norway's Anders Jacobsen has won the second event of the Four Hills tournament in Garmisch-Partenkirchen. Germany's jumpers, although showing a slight improvement, were again disappointing. 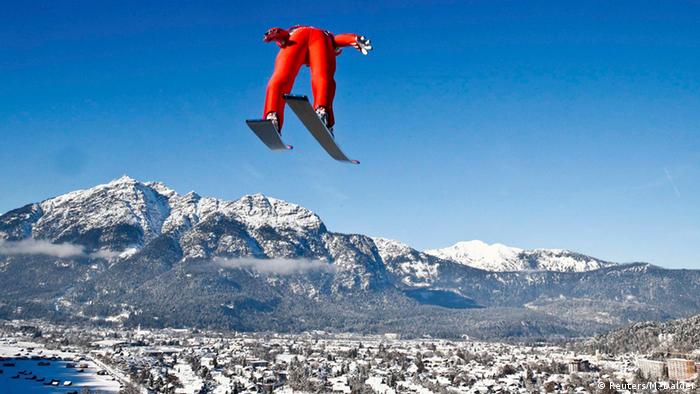 Perfect ski jumping conditions at the German resort of Garmisch-Partenkirchen saw Anders Jacobsen get a surprise win at the second event of this year's Four Hills tournament. It was Jacobsen's first win after recovering from a cruciate ligament injury in 2013 and his 10th World Cup win overall.

Some 20,000 fans were on hand under blue skies as the Norwegian beat off strong performances from Switzerland's Simon Ammann and Slovenia's Peter Prevc to claim first position, with a perfect final jump.

"These two days have been a dream here in Garmisch-Partenkirchen," Jacobsen told German broadcaster ARD after the event. "This hill is just something magic for me."

Jacobsen's high points haul on Thursday (286 points) saw him claw his way back up the overall standings for the Four Hills event. Austria's Stefan Kraft remains the overall leader of the tournament though, after a solid showing in Garmisch. Peter Prevc and Martin Hayboeck are second and third respectively, with Jacobsen now sitting in fourth.

Richard Freitag and Severin Freund were once again Germany's best performers at the New Year's jump, coming in ninth and tenth respectively. 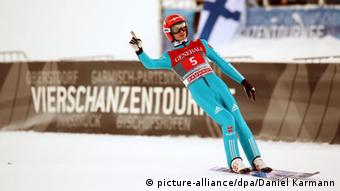 Richard Freitag was happy with his second jump, but it wasn't enough to get on the podium

"The second jump was okay," Freitag told ARD, before looking ahead to the next event in Austria on January 4.

"We can't switch off for a day now, that makes no sense," he said. "We have to look at the mistakes and analyze them."

No matter who wins in Innsbruck though, one thing is for sure: No jumper will manage to win on all four hills this year, after Austria's Kraft won on Monday.

The last jumper to manage that feat was Germany's Sven Hannawald who won all four Vierschanzentournee events back in 2001/2002.