The small Balkan state is bracing for tough coalition talks after the Social Democrats narrowly edged out rival conservatives. The vote was the first of its kind since the country added "North" to its name last year. 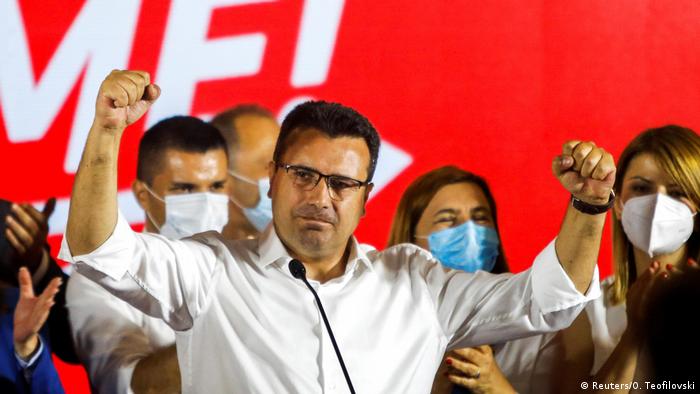 The pro-European Union Social Democrats said they were ready Thursday to kickstart coalition talks, paving the way for tough power-sharing negotiations after the center-left party narrowly edged out their conservative rivals.

Projections from the state election commission showed the Social Democrats in line to win 36% of the vote, or 46 seats, attaining only two more seats over nationalists VMRO-DPMNE in the 120-member assembly.

The ethnic Albanian Democratic Union of Integration party polled at third with 10.2% support.

With the razor-thin margin, VMRO-DPMNE said they could ultimately emerge winners in coalition negotiations and form a government.

Zaev had spearheaded the country's efforts to resolve the decades-long name dispute with neighboring Greece, a prerequisite before the small Balkan country joined NATO this year, but the move was controversial at home.

"The path taking us forward has been cemented," Zaev told supporters after declaring victory Wednesday.

The electoral commission's website stopped functioning at one point and was still not restored three hours after polling ended at 9:00 p.m. local time (1900 GMT). As a result, the count was instead streamed live on YouTube.

Commission president Oliver Derkovski said that the website had been hacked, but that the election count had not been affected.

International election observers described the election — which had been delayed for months due to the coronavirus pandemic — as being "well-managed."

Wednesday's vote is the ninth parliamentary election since the Balkan republic of 2 million people declared its independence from Yugoslavia in 1991.

The election result could take the recently renamed country a step closer to EU accession, should the Social Democrats hold onto its lead.

The vote was originally scheduled for April but postponed due to the coronavirus pandemic. Citizens arrived at polling stations to cast their ballots donning mandatory face masks.

Zoran Zaev and his Social Democrats will probably get the chance to continue their pro-Western agenda, but the new, weaker government could face major obstacles to staying in power and leading the country forward. (16.07.2020)