North Korea's heir-apparent Kim Jong-Un on Sunday watched a military parade in the center of the capital Pyongyang, a Yonhap news report said. 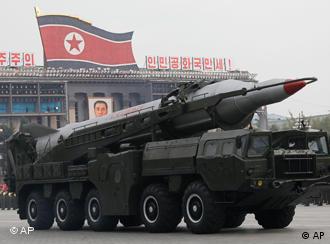 North Korea's heir-apparent Kim Jong-Un has been watching a military parade in the centre of the capital Pyongyang on Sunday, Japanese news agency Yonhap news reported.

The vast parade was to mark the ruling communist party's 65th anniversary. 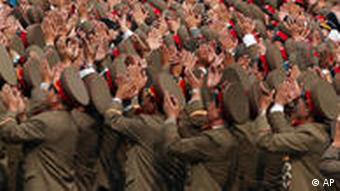 The parade is part of celebrations marking the 65th anniversary of the founding of the country's ruling Workers' Party.

International media were invited to watch the parade, giving international audiences a rare look at the man who is thought to be the future leader of the secretive Communist nation.

State media showed the elder Kim applauding the military parade, but made no mention of his son. However, South Korea's Yonhap news agency said Jong-Un was also attending the celebrations.

Meanwhile across the border in South Korea, a former senior member of North Korea's ruling Workers' Party, who defected to South Korea in 1997, has been found dead, according to Reuters news agency and other foreign media.

No more details were immediately available.

The 88-year-old Hwang Jang-Yop was the chief architect of North Korea's guiding 'juche' philosophy of self-reliance. He had tutored leader Kim Jong Il on the ideology.

Since defecting, Hwang had lived in Seoul under tight police security.

For the first time since his childhood, North Korean media have published a picture of Kim Jong-un. The enigmatic son of leader Kim Jong-il was appointed to senior posts this week. (30.09.2010)

The conference of N Korea's ruling party is expected to set the stage for Kim Jung-il's successor (27.09.2010)