Portuguese Nobel laureate Jose Saramago has died at his home in Spain. Saramago was known for his dramatic, fantastical style as well has his page-long sentences. He was 87 years old. 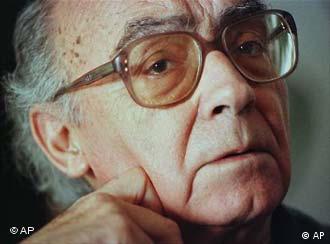 Saramago was known for his strong political views

Jose Saramago, a Nobel laureate and an outspoken communist, has died at the age of 87.

The Portuguese author, who won the Nobel Prize for literature in 1998, passed away Friday at his home on the Spanish Canary Island of Lanzarote, his family said.

Saramago, who had lived on Lanzarote for several years, was born in 1922 in the town of Azinhaga, near Lisbon. He began his working life as a machinist, and later worked as a technical illustrator and journalist.

The author first began writing literature at age 40, publishing his first volume, "Os Poemas Possiveis" ("The Possible Poems"), in 1966. His writing was noted for its fantastical scenarios, as well as its evocative and baroque language.

Saramago was also an outspoken communist and left his native country for Spain in part due to his disagreement with national politics. The author was known for his rants against what he saw as injustice, including Israel's handling of Palestine.

Asked once about his apparent pessimism, the author said that the only people who could afford to be optimists were either stupid, had no feelings or were millionaires.

Elie Wiesel survived Auschwitz, the Nazi concentration camp where his father, mother and little sister died. Since then, Wiesel has dedicated his life to making sure the Holocaust is never forgotten. (30.09.2008)