The Nobel Prize in Chemistry has been awarded to three scientists for developing proteins. The scientists were honored for their respective research on sustainability and cancer treatment. 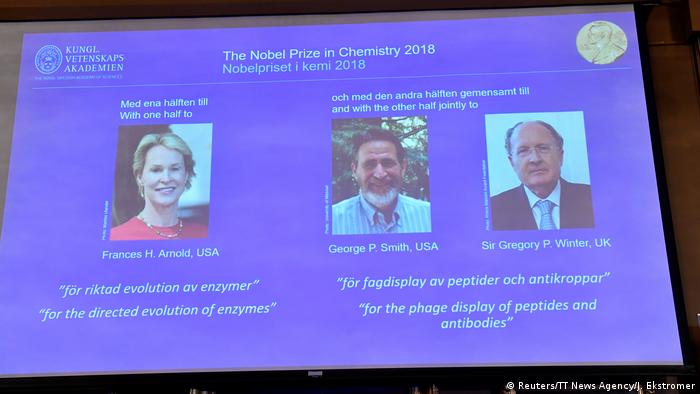 The Nobel Prize in Chemistry was on Wednesday awarded to two Americans and a British man.

Frances H. Arnold (US) of the California Institute of Technology, George P. Smith (US) of the University of Missouri, and Sir Gregory P. Winter (UK) of the MRC Laboratory of Molecular Biology will share the award.

The three scientists helped develop proteins that "solve humankind's chemical problems," the Royal Swedish Academy of Sciences said, adding that they "have taken control of evolution and used it for purposes that bring the greatest benefit to humankind."

Arnold, the fifth woman to win the chemistry prize, is known for her work on enzymes that has assisted in more environmentally friendly production of pharmaceuticals and other substances and the production of renewable fuels.

One example of Arnold's ground-breaking research includes a method of creating new proteins with desired properties that is being used to convert renewable resources like sugar cane into biofuels.

Smith and Winter were honored for their work on the "phage display of peptides and antibodies," which has led to the production of antibodies used to counteract toxins and in some autoimmune and cancer therapies.  Medications for rheumatoid arthritis, psoriasis, and inflammatory bowel diseases have come from their work.

"They have applied the principles of Darwin in test tubes. They have used the molecular understanding we have of the evolutionary process and recreated the process in their labs," the head of the Academy's Nobel Chemistry committee, Claes Gustafsson, said of the winners.

"They have been able to make evolution many 1000s of times faster and redirect it to create new proteins."

Eyeing a 'third woman' at the 2018 Nobel Prize in Physics

The 2018 Nobel Prize in Physics recognized revolutions in laser physics. And the lack of a revolution in equality and diversity. (02.10.2018)

Three researchers who paved the way for advanced precision laser instruments have been awarded the Nobel Prize in Physics. They trio will split the award of 9 million Swedish kronor (€866,000, $1 million). (02.10.2018)

Arnault, the Frenchman at the center of the Nobel Prize scandal, found guilty of rape

Jean-Claude Arnault has been accused of harassing at least 18 women, including Sweden's heir to the throne. He is also suspected of leaking the names of Nobel Prize winners. (01.10.2018)

US approves more weapons sales to Taiwan 6h ago

US, India to sign defense pact on sharing satellite data 7h ago