Who gets what in times of resources getting scarcer and scarcer? US academics Alvin Roth and Lloyd Shapley have provided answers to that question good enough to snatch the 2012 Nobel economics prize. 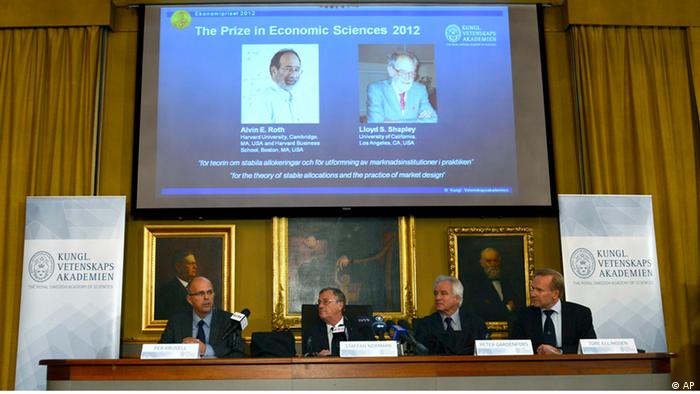 There's finally an end to speculation - well, not on the stock markets, but on who wins this year's Nobel economics prize. The Royal Swedish Academy of Sciences on Monday granted the award to US academics Alvin Roth and Lloyd Shapley.

When the decisive call came from Sweden, "it was dark and I was asleep," Roth said by phone from California. He said the announcement caught him by surprise. The academy in Stockholm said the two men deserved the prize for their research on the theory of stable allocations and the practice of market design.

Roth is 60 years old and lectures at Harvard University. Shapley is aged 89 and affiliated with the University of California in Los Angeles.

Shapley has made a name for himself by developing so-called decision theories in which he looked at markets where the rules of supply and demand are drawn up via pricing policies. And there are more such markets than one would normally assume. Take the wedding market, the educational market or that involving organ donation. In all those markets, the price for a product or service ought not to play a primary role for ethical reasons. Back in the 1950s and 1960s, Shapley defined simple algorithms for acceptance or refusal which he believed would lead to the best results for all parties involved in such markets.

That sort of theoretical game play continued for about three decades until Alvin Roth discovered in 1984 that Shapley's algorithms were successfully being employed by a US institution. When there was a lack of assistant doctors in the US, some hospitals offered medical students jobs on spec. Accordingly, students had to make job decisions much earlier than usual. The whole decision-making process became more efficient as a result.

Roth's and Shapley's ideas could also be used to ease the process of finding the right organ donors for patients. All in all, the two men's research goes to show that markets can function superbly without being regulated by prices.

Not a real Nobel prize? 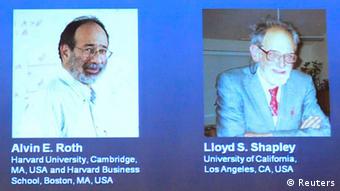 For many years now, the economics award is awarded alongside all the other Nobel prizes, although it was not really endowed by the legendary Swedish industrialist at all. The economics prize was first awarded by the Sveriges Riksbank in 1969 to honor Alfred Nobel. The recipients have since mostly been US scientists, almost all of them male with only one exception so far. In 1994, the prize went to Reinhard Selten of Germany for his work on game theories - the only German to have won the award so far.

Which then is the right economic theory? It's a case of John Keynes versus Milton Freidman, or a case pitching less state influence against more state influence in the markets. The economic sciences have always dealt with both models, and the announcement of the Nobel economics prize has often been accompanied by fiery ideological debates.

In order to keep the balance, the Royal Swedish Academy in 1974 awarded the prize to two scientists whose theories couldn't possibly have been more different. On the one hand, it went to Friedrich August von Hayek, a staunch supporter of a liberal economic and state order who often surprised with rather radical suggestions. On the other hand, the same prize was given to Gunnar Myrdal, an entrenched Socialist and critic of all neoliberal theories. Not amused at getting the prize jointly, the two men at least agreed on one thing. Both said the prize should be done away with immediately.

Since the turn of the millennium, the economics prize has gone quite often to market skeptics, with recipients demanding an end to the debt spiral in Europe. Last year, US economists Thomas Sargent and Christopher Sims shared the prize for methods to study the relationship between economic policy and macroeconomic variables such as gross domestic product, inflation, employment and investments.

In Focus: DW's overview of the Nobel Prizes 2012