Noam Chomsky: "Saving the commons from the wrecking ball of commercial destruction"

"The commons have been steadily dismantled by the principle that everything has to be privately owned." These were the words of American political critic Noam Chomsky at the Global Media Forum (GMF) in Bonn. 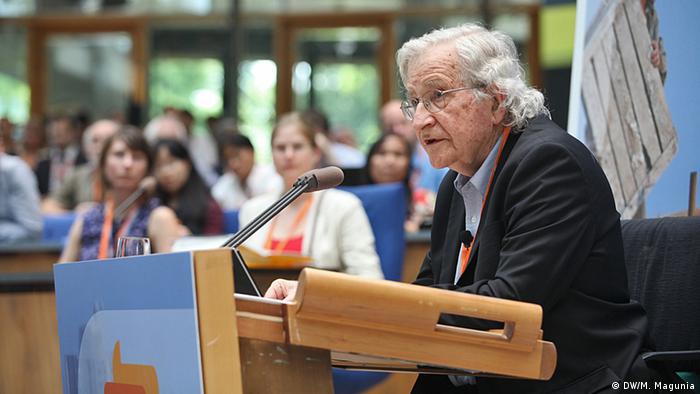 Widely regarded as the intellectual father of the Occupy Movement, Chomsky spoke about the current conflict in Gezi Park in Istanbul, saying that "the protesters are trying to save the last part of the commons in Istanbul from the wrecking ball of commercial destruction." The renowned 85-year-old linguist and philosopher gave a lecture at the Global Media Forum entitled "Roadmap to a Just World - People Reanimating Democracy."

Chomsky also addressed the continued decline of civil rights in the United States and other Western democracies, which he referred to as "Real Existing Capital Democracies" or RECD for short.

"The masters do not relent. The more freedom is won, the more intense are the efforts to redirect society to a proper course," he said. The influence of the US is not based on "its inherent character," he said, but because of its power "other states tend to move in that direction."

Professor Chomsky asserted that the general public can only act when they are informed. He talked about the larger forces working in the background, especially those that endanger world peace. "Here the free press enters," he said. His closing message was to ask the media to "tell the truth about important things."

Over 2,500 guests from all over the world are taking part in the three-day Deutsche Welle Global Media Forum at the World Conference Center (WCCB) in Bonn. This is the Forum's sixth edition and the theme this year is "The Future of Growth - Economic Values and the Media." Around 50 workshops and plenary sessions are organized in cooperation with many of DW's partners.

The 2013 Deutsche Welle Global Media Forum is co-hosted by the Foundation for International Dialogue of the Sparkasse in Bonn. It is supported by Germany's Federal Foreign Office, the Federal Ministry for Economic Cooperation and Development (BMZ), the European Regional Development Fund, the Minister for Federal Affairs, Europe and the Media in the German state of North Rhine-Westphalia, as well as by the City of Bonn. The North Rhine-Westphalian Foundation for Environment and Development is a cooperation partner.

Deutsche Welle is providing live streaming of the main events of the Global Media Forum at http://www.techcast.com/events/dw. Upcoming live streams will include the awards ceremony for "The Bobs - Best of Online Activism" on Tuesday, June 18 (5:30 p.m. – 6:30 p.m. CEST) and the keynote speech of Indian human rights activist Vandana Shiva on Wednesday, June 19 (1 p.m. – 1:45 p.m. CEST).