Chancellor candidate Angela Merkel's apricot ensemble attracted all eyes at the premiere of the Richard Wagner Festival. And some didn't like what they saw, including an editor with a liberal approach towards Photoshop. 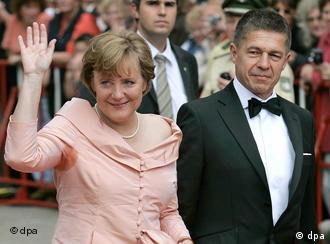 Never let them see you sweat: Merkel and her husband at Bayreuth

The sun beat down on the Christian Democratic Union leader as she trod the red carpet on her way to the opening performance of "Tristan and Isolde" in Bayreuth on Monday. And the photographers captured it all: Merkel's jacket-skirt combination in neutral apricot, her tousled hair, reserved smile, friendly wave -- and the dark fleck that sprouted from her armpit, proof that the conservative leader does indeed sweat.

Apparently disturbed that Merkel exposed herself to be a mere mortal, a picture editor at public broadcaster BR's Web site -- and ostensible CDU voter -- gave the lady a helping hand with some digital trickery, blotting away the unsightly stain that marred her fancy dress.

The -- spotless -- image of Merkel alongside her husband, Joachim Sauer, was part of a BR-Online picture gallery of celebrities sighted at the opening night of the festival.

BR has since taken the retouched photo off the site, its multimedia chief, Rainer Tief, said Wednesday, adding that altering the picture violated the broadcaster's principles.

Merkel, who recently went through an image make-over to soften her severe appearance, has yet to comment on the incident. In any case, the country will surely be watching her even more closely as outdoor temperatures -- and the German election campaign -- heat up.

Wagner for the Masses?

Celebrities from the world over are walking the red carpet at the Bayreuth festival. But how do mere mortals get their hands on a coveted ticket? (July 26, 2005)

She may not have been thrilled with the comparison at first, but a housewife from Lübeck is enjoying a burgeoning career as chancellor candidate Angela Merkel's double. (July 20, 2005)

DW-WORLD's "And Finally…" brings you news on weird and wonderful happenings from all over Germany.