No significant progress in four-way Ukraine talks in Berlin

The foreign ministers of Germany, Ukraine, Russia and France have failed to find enough common ground to go ahead with a summit of leaders later this week. This ended the latest attempt to resolve the Ukraine crisis. 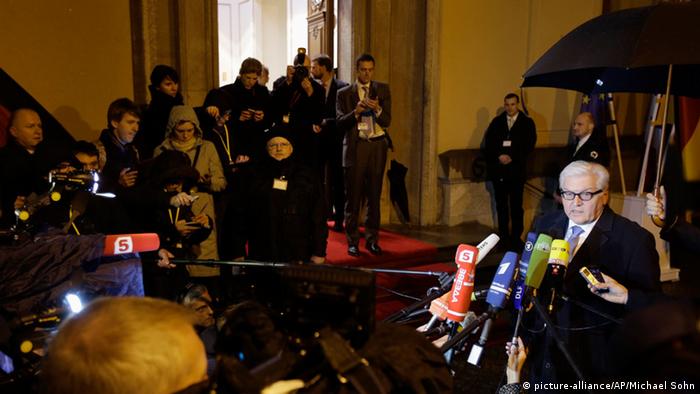 German Foreign Minister Frank-Walter Steinmeier, who hosted his three counterparts in closed-door talks in Berlin, told reporters late on Monday that what he described as a "very open exchange" had failed to reveal enough common ground to move ahead with a higher-level summit.

"The differences of opinion made clear how difficult it is to make progress along the path to a political solution, but also to a summit in Astana (Kazahkstan), which many expect, but which also needs to be prepared," Steinmeier said.

He added that representatives from the respective ministries would meet in the coming days to see if they could bridge differences, and it was possible that the foreign ministers could meet again at short notice.

"If there is progress made at that level in the coming days, then we are prepared to meet again next week and resume this discussion we began today," he told reporters.

A joint statement released by Steinmeier, Russian Foreign Minister Sergei Lavrov, Laurent Fabius of France, and Ukraine's Pavlo Klimkin, also called on the contact group of Ukraine, Russia, and the Organization for Security and Cooperation in Europe to meet to try and make progress on implementing a peace deal meant to end the fighting in eastern Ukraine, which was agreed in Minsk last September. They also called on them to work towards the creation of "relevant conditions for an effective ceasefire," as the one agreed in Minsk has been repeatedly violated.

More than 4,600 people have been killed since the fighting in the eastern Ukraine regions of Donetsk and Luhansk broke out in April, following Russia's annexation of Ukraine's Crimean Peninsula.

Ukraine and the West have accused Moscow of stoking the fires of conflict in eastern Ukraine by supplying pro-Russia separatists with troops and weapons, something the Kremlin has denied. The European Union and the United States have imposed sanctions on Russia over its alleged involvement in the conflict.

German Chancellor Angela Merkel has criticized Russia for its attitude toward Ukraine's separatist forces. Merkel said that all sides needed to contribute towards making the Minsk agreement a success. (11.01.2015)

Hollande: Russia sanctions should be lifted now 'if progress'

Francois Hollande has called for Western sanctions against Russia to be lifted if there were signs of progress in ending the Ukraine crisis. He's expected to join Chancellor Merkel at upcoming talks in Kazakhstan. (05.01.2015)