No party likely to win majority, say opinion polls ahead of UK elections

Neither the Conservatives nor the Labour Party are likely to win an overall majority in UK's elections on May 7. Both parties are nearly level with around 30 percent support. 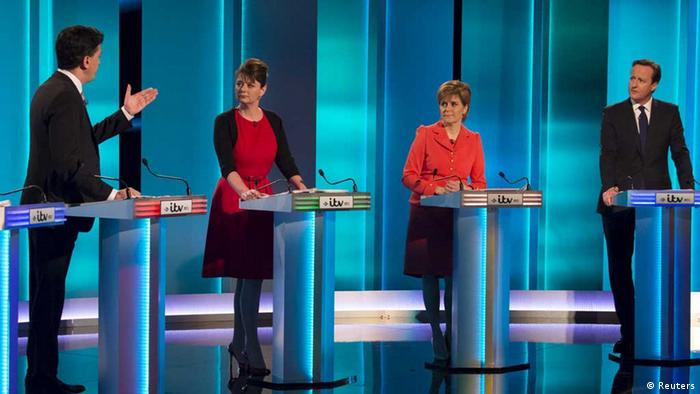 UK is going to the polls on May 7, but no single party has managed to convince enough voters for an overall majority, if opinion polls are to be believed.

An ICM poll for the Sunday Telegraph newspaper said the Conservatives and the opposition Labour Party were level with 32 percent support each. The survey said Labour supporters seemed more optimistic about their party's prospects than the Conservatives.

Another survey conducted by YouGov for the Sunday Times showed 36 percent of voters supporting the Labour Party while 33 percent backed Prime Minister David Cameron's Conservatives. Cameron's coalition partners, the Liberal Democrats could win around eight percent of the vote in the election and the anti-European Union UK Independence Party had 13 percent supporters, the poll said.

However, another survey by Opinium showed the Conservatives leading against the Labour Party with 36 percent votes compared to Labour's 32 percent.

Most opinion polls have shown votes split evenly among UK's two main parties, but a coalition could be imminent, since neither is likely to win an absolute majority in the country's 650-seat parliament.

The Scottish National Party could deliver a major upset in May's UK election, essentially making a Labour majority impossible but possibly forcing them into a coalition with the SNP. Peter Geoghegan reports from Annan. (16.04.2015)

In the Tory stronghold of Chingford, previously Conservative voters and even some immigrants say they are considering switching allegiance to UKIP in May's general election. Mike Power reports from London. (02.04.2015)

The British government has rolled out a buffet of tax cuts as it hopes to win over voters ahead of the tightest election in generations. The Finance Minister hailed the new budget as "one more step" towards prosperity. (18.03.2015)