No-fly zones protect civilians, but political uncertainties remain | News and current affairs from Germany and around the world | DW | 23.03.2011

As the UN-backed coalition seizes control of Libyan airspace, Washington maintains that Gadhafi must leave power. But past no-fly zones in Bosnia and Iraq suggest that air campaigns have a limited impact on the ground. 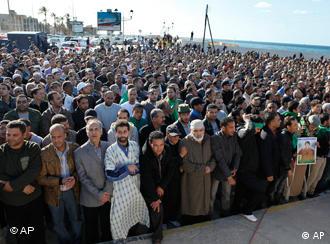 With Moammar Gadhafi's forces allegedly crippled after the initial round of airstrikes, coalition forces are moving to expand the UN-sanctioned no-fly zone to encompass Libya's vast and densely populated coastal region, General Carter Ham - commander of US Africa Command - told reporters in Washington earlier this week.

According to the UN resolution 1973, the no-fly zone's express purpose is to protect civilians from Gadhafi's forces and maintain the arms embargo imposed against Libya. Although the resolution focuses on humanitarian ends, US President Barack Obama has called on Gadhafi to step down, suggesting that the political goal is regime change.

Past experience with no-fly zones imposed over Iraq and Bosnia during the 1990s points to the uncertainties associated with such operations. While no-fly zones often achieve the limited goal of protecting civilian life, they rarely force the targeted government to make broad concessions and can result in political stalemate.

After Iraq's defeat in the first Gulf War in 1991, Shiite Muslims in the south and ethnic Kurds in the north revolted against Saddam Hussein's dictatorial rule. Hussein moved to suppress the uprisings with military force, deploying attack helicopters that massacred civilians. In response, the international community - led by Britain and the US - imposed no-fly zones to protect the Shiites and Kurds.

Michael Schmitt, a former legal advisor to the no-fly zones, says that the coalition air operations were successful in protecting Shiite and Kurdish civilians from coming under attack. But he cautions that no-fly zones rarely force the targeted regime to make broad political concessions. In the case of Iraq, the operation dragged on for years.

"It's difficult to contemplate an end state," Schmitt told Deutsche Welle. "Those zones were created in 1991 and 1992 in the north and south respectively and did not end until the Second Gulf War [in 2003]. So we're talking about a period of 11 years that those no-fly zones were in place. And it takes a lot of political will to continue to maintain those zones."

According to Schmitt, the challenge in Iraq was that the coalition had no stomach for regime change, and it could not lift the no-fly zone because with Hussein in power, the Shiites and Kurds remained at risk.

"The danger is that you terminate the no-fly zone and the state that is the target turns its arms on the civilian population again," he said.

And even with the no-fly zone in place, there is no guarantee that civilians will be spared. In the case of Bosnia in the early 1990s, the no-fly zone imposed to protect civilians from Serb forces ultimately failed to prevent crimes against humanity, resulting in broader airstrikes aimed at crippling the Serb advance.

"No-fly zones are easy to undermine and don't always impede the mobility of the opposing forces on the ground," Henning Riecke, security policy expert with the German Council on Foreign Relations, told Deutsche Welle. "For example the massacre at the [Bosnian city] Srebrenica occurred when the no-fly zone was in place."

And according the Riecke, no-fly zones become more difficult to enforce the larger they are. The two zones over Iraq were three times larger than the one imposed over Bosnia. And the operation against Gadhafi has an even larger scale.

"In Libya, the no-fly zone may be up to three times as large as those in Iraq," Riecke said. "It is going to be a very difficult operation that may not be able to constrain the mobility of Gadhafi's forces against the opposition. That's why the UN mandate is broad."

Douglas Barrie, an expert on military air power with the International Institute for Strategic Studies, says that the issue currently at hand in Libya is what to do once the no-fly zone is in place. He says that military operations often evolve beyond their originally defined goals.

"In any military operation there's always a risk of mission creep," Barrie told Deutsche Welle. "How you manage that and how you try and avoid that happening is the critical question."

In the case of Libya, managing mission creep could prove difficult due to ambiguity as to what the coalition actually hopes to achieve by intervening. Riecke says that the lack of a clearly defined long-term goal leaves the air campaign open ended.

"The European Union and the individual nation states would like to see Gadhafi step down, but the operation itself has a humanitarian character, it's supposed to protect the civilian population," Riecke said. "Since nobody can make a clear decision about what the goal is, it's going to make it difficult to define the content and extent of the measures taken."

According to Riecke, Gadhafi may manipulate the uncertain political environment within the international coalition to his own advantage. He may try to pull the coalition deeper into a bloody conflict. In this situation, the allies would face a test of will power, particularly if civilian casualties mount. 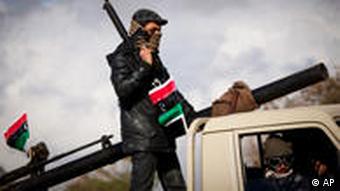 "Gadhafi may try to draw out an armed conflict in the belief that time is on his side," Riecke said.

For the coalition, perhaps the more precarious scenario would be if Gadhafi actually implements a serious cease-fire. In this case, Libya would be divided between government and opposition-held territory. And Gadhafi would remain in power, despite Western calls for him to step down.

"At the end of the day Gadhafi holds the cards," Schmitt said. "He will decide what happens. If he actually implements a cease-fire instead of talking about it and he pulls his forces back into their barracks it would be hard for the international community to continue action other than the no-fly zone, which would simply serve as a deterrent."

Regime change in Libya may require involvement in ground war

Coalition airstrikes against Gadhafi's forces have stopped his advance toward the opposition stronghold of Benghazi. However, ousting Gadhafi from power may require directly supporting the opposition in a ground war. (21.03.2011)

DW-WORLD offers full multimedia coverage of the fighting and political upheaval in Libya. What events led up to a debate over a no-fly zone - and what do they means for the oil-producing nation and the world? (21.03.2011)