Fast food giant Domino's has reported the first successful delivery of pizzas by a drone in New Zealand. The company proved that foodstuff deliveries by drones were no longer just "a pie in the sky." 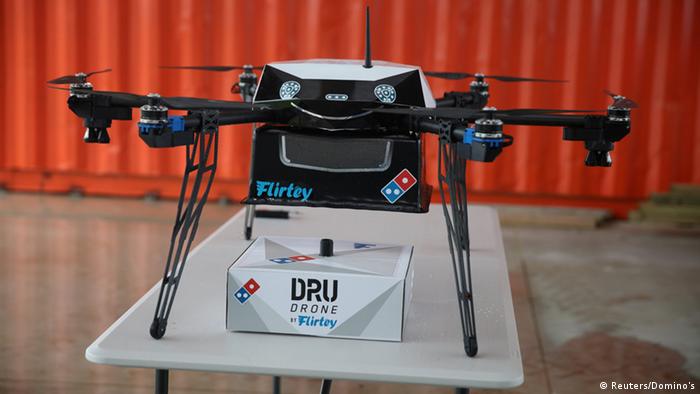 The world's first pizza drone delivery was claimed Wednesday by the New Zealand division of the Domino's fast food chain as it looked to grab a slice of a potentially hot future market.

Domino's said it used an unmanned aerial vehicle to deliver two pizzas to a couple in Whangaparaoa, just north of Auckland.

"They can avoid traffic congestion and traffic lights and safely reduce the delivery time and distance by traveling directly to customers' homes," he said. "This is the future. Today's successful delivery was an important proof of this concept."

The two pizzas in question were delivered within just three minutes of flying time, Stuff.co.nz reported online. That's about the time "it can take our drivers on busy days to get out of the car park, so [delivery by drone] will be a game changer," said Domino's General Manager Scott Bush.

"We hope to have all orders being delivered by drone to everyone within the next couple of years," he added.

In March, the company unveiled a robot cart being trialed in New Zealand and billed as the world's first driverless pizza delivery vehicle.

Rwanda's government has launched a drone network capable of delivering vital blood supplies to far-flung areas. It's hoped the speedy delivery service will help save lives in hard-to-reach parts of the country. (14.10.2016)

Chinese e-commerce giant Alibaba has started testing delivery drones in three major cities, echoing similar activities by US rival Amazon. But the company is up against tough airspace control in the country. (04.02.2015)

Germany's express delivery and mail company Deutsche Post DHL is testing a drone that could be used to deliver urgently needed goods to hard-to-reach places. The aircraft can carry up to 3 kilograms (6.6 pounds). (09.12.2013)