Revellers ushering in 2009 will have to literally wait a second this New Year's Eve. The world's official timekeepers are adding a "leap second" to the final day of the year to help match clocks to the Earth's spin. 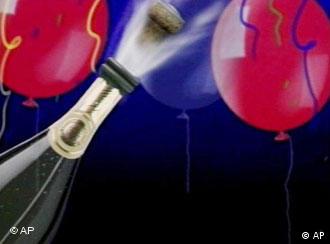 Don't pop that cork a second too soon!

The International Earth Rotation and Reference Systems Service (IERS) has to occasionally add an extra second to keep our clocks in sync with solar time used by astronomers. That's because, sometimes, the Earth's rotation on its axis can take longer or shorter than 24 hours, depending on factors such as the breaking action of tides, snow or the lack of it at the polar ice caps, solar wind, space dust and magnetic storms.

"The difference between atomic time and Earth time has now built up to the point where it needs to be corrected, so this New Year's Eve we will experience a rare 61 second minute at the very end of 2008 and revelers... will have an extra second to celebrate," Peter Whibberley, a senior research scientist at Britain's National Physical Laborator told the British media.

The U.S. Naval Observatory, keeper of the Pentagon's master clock, said it would add the extra second on Wednesday in coordination with the world's atomic clocks at 23 hours, 59 minutes and 59 seconds Coordinated Universal Time, or UTC. 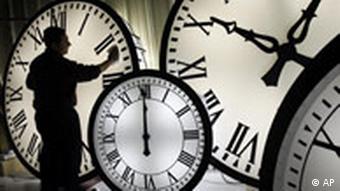 It'll be the first leap second to be added in three years, and the 24th to be added since the practice began in 1972.

If the disparity between the Earth's rotation and atomic clocks were not corrected, researchers say the "error" could increase to several seconds within a few decades, and eventually impair some of the software and hardware used by astronomers.

UTC has been the world's official clock since 1967, and is accurate to about a billionth of a second per day, the US Naval Observatory says. It is used for broadcasting time signals across the world, and is essential for the smooth running of GPS and the Internet.

Europe's Clock Man Has All the Time in the World

If you use a radio-controlled watch in Western Europe, or observe an airport clock, the chances are that both are being calibrated from a laboratory in the north of Germany. (26.10.2008)

European researchers have leaped closer to making nuclear fusion a practical energy source for humanity. It's the same power-generating process that makes stars, including our own sun, shine.

In 2015, scientists proved the existence of gravitational waves. These waves travel billions of light-years through space, eventually reaching Earth and bringing us insights that were previously unattainable.