A new online Helsinki-based group is helping modernize the way legislation is created. But its organizers say it will take at least a year for the first bill to reach the Finnish parliament. 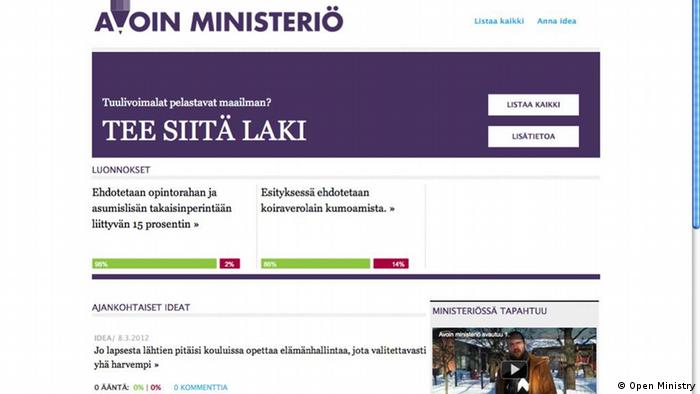 On March 1, 2012, modifications of the Finnish constitution went into effect that allow any citizen to propose a new law. The Citizens' Initiative Act requires 50,000 citizens of voting age to sign on to an idea to show support, before it gets passed to the parliament for a vote. In anticipation of this new right, some Finnish tech entrepeneurs have recently founded a website called Open Ministry, or “Avoin ministeriö” in Finnish, that provides an online platform for new ideas to be turned into proposed bills. The site provides a way for citizens to discuss legislative proposals and also to collect the necessary electronic signatures. The Finnish government, however, has yet to implement the online procedures needed to verify citizen's identification.

To learn more, DW spoke with one of the organization's founders, Joonas Pekkanen. 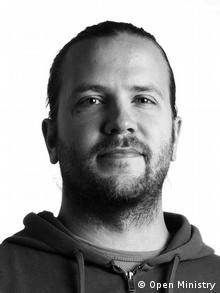 Joonas Pekkanen is one of the founders of Open Ministry

DW: What exactly is the Open Ministry?

It's our attempt to crowdsource the legislation procedure, which obviously is done in the actual ministries. But now that Finland passed the citizen's initiative act and made changes to the constitution it's now possible for a group of citizens to come up with law proposals, and that's what we help do.

In other words, before this new law, it was not possible for ordinary citizens to propose a bill?

No, it was not possible. It was possible for members of parliament to propose bills but typically those would come from the opposition and they would be voted down.

These new bills, do they automatically get voted on - or maybe this hasn't happened yet?

No, it hasn't happened yet. There's quite a threshold. We need to collect a combination of 50,000 electronic or paper signatures for the citizens' intiative, and then the parliament must vote on those proposals.

Does the parliament have the abililty to change the text of the law, or do they have to just vote yes or no?

They can change things in the proposals. To clarify, there are two types of proposals. There's one type that is asking for the government to take actions towards a goal, to change existing legislation somehow. Then there's a new legal bill that is formulated in a crowdsourced manner. In that case, it's harder for the parliament to change it because it's drafted into legal language already. 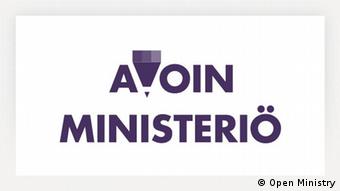 Open Ministry hopes that within a year, it will have proposed a law to the Finnish parliament

We've reported on a similar measure, from Latvia, called Manabalss.lv. Were you inspired by this project or from anywhere else?

No, not really. We only came across the Latvian project later on. That's an interesting project also. We've tried to contact them to see if there's anything we can do together.

So what kinds of things are being proposed on the website currently?

Someone has proposed changes to the personal bankruptcy law. In Finland you can't declare personal bankruptcy as you can in other countries. Another one, which is apparently in place in the US, would be to set the limits of advertisement volume, because the ads on TV and radio are much louder than the actual content. Another one is to allow bicycling on both ways on streets that are only one-way for cars. That's a law that already exists in Germany and Switzerland.

When do you expect these proposals to get to the Finnish Parliament?

What I consider a realistic target is that we would have one before parliament within a year.

The 'My Voice' website demonstrates Latvians' interest in policy petitions and helps citizens get their proposals heard in parliament. (25.08.2011)

In a DW interview, Smari McCarthy describes how net neutrality, government transparency, and freedom of information may soon be enshrined in Icelandic law. (09.08.2011)