Removal of the scaffolding from the US embassy construction site in Berlin has triggered fresh debate about this symbol of Washington's power on the site of the former Berlin Wall. 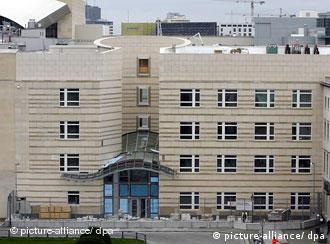 With the scaffolding finally gone, the US embassy building is causing controversy

The embassy is set to be inaugurated on July 4, US Independence Day, but tourists are already snapping pictures of the building, which has a front door on prestigious Pariser Platz, with the Brandenburg Gate, French embassy and luxurious Adlon Hotel as neighbors.

Its completion fills the last gap on an upscale square that in less than two decades has turned into a gallery of contemporary architecture. The US project was delayed by years of wrangling with the city of Berlin over buffer zones to foil car bombings. 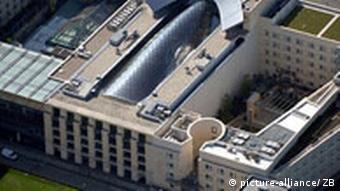 A throwback to 1980s post-modernism?

Lines of waist-high pillars are the most obvious security features around the four-storey sandstone building, which has its longest frontage not on the square but on a four-lane road, which is where most tourists in buses will see it first.

The embassy Web site says the design is intended to "provide an open yet secure presentation of America."

Great view -- for the ambassador

From the penthouse, US Ambassador William Timken will have a panorama of Berlin history all around him.

The view has been carefully composed to show the Quadriga horses on top of the Brandenburg Gate seeming to ride across the embassy's rooftop garden of native American grasses. Timken will also have a close-up view of the dome on the Reichstag and the Tiergarten park. To the south, the embassy faces the somber Holocaust Memorial, with the office towers of Potsdamer Platz, 400 meters (a quarter of a mile) away.

Timken remembers standing on the site as a visitor to Germany in the early 1990s when it was weed-covered wasteland.

"The Berlin Wall had stood there just a short time before with the 'death strip' next to it," said Timken, who arrived as ambassador in 2005. "I couldn't have imagined it as the site for our embassy." He spoke of his "wonder" at the embassy's return to the historic site. 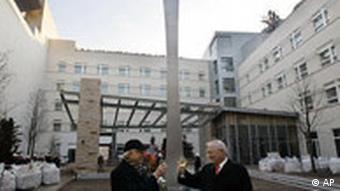 Timken (right) has defended the building

Much about the building's design seems influenced by security needs rather than such emotions: the walls are reinforced, the glass bomb-proof, and a strong fence separates the site from the main road where visitors to the consular office enter the building.

The security is part of the price the United States has paid since the Sept. 11, 2001 terrorist attacks on New York and Washington.

But compared to the old US embassy in Berlin, which is isolated behind ugly concrete and steel barriers with gun-toting guards, the airy, $120-million (78-million euro) new embassy with its many windows seems like a project in disarmament.

But architecture critic Gerwin Zohlen is unimpressed. He partly called the newly unveiled exterior "boring" and a "rather uninspired" example of 1980s post-modernism that was already out of date.

He suggested Berliners nickname the building by California architects Moore Ruble Yudell the "Pancake," in reference to the main-road side that tourists will pass on their way to the Holocaust Memorial.

"It gives the impression of being horizontally stretched out," he told DPA news agency.

Instead of projecting the grandeur of a superpower, the building suggested a nation that had given up being world policeman and withdrawn into self-defense, Zohlen said.

"It would look okay in the US Midwest. But it doesn't suit an inner city in 'Old Europe.'" 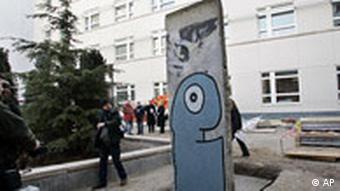 Zohlen said the stonework was shoddy and the building looked "cheap," a view that has a basis in fact, since the US Congress pared back the construction budget by $60 million compared to the original proposal.

He called the building "bunker-style," a charge also lobbed at the French embassy, which opened across the square in 2003.

Ambassador Timken, however, spoke out in defense of the building's security features before the scaffolding came down, saying it was the price of building on the inner-city site.

It would have been easy to build a compound with an ample buffer zone well away from the city center, but the diplomats had wanted to be "part of Germany" at the heart of Berlin.

The city wanted that too, and made some concessions so the project could go ahead. Ebertstrasse, which separates the embassy from the park, was slightly realigned so the buffer zone would be wider. 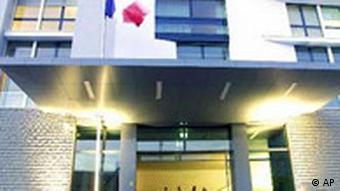 In any case, the US mission is not the only embassy fixated on security. The British embassy ensured that Berlin closed its street to all traffic.

The US link to Pariser Platz goes back to the early 1930s when the United States bought a fire-gutted palace there, but could not restore it at first because of the Great Depression.

When Adolf Hitler came to power, the US embassy was in rented premises.

The embassy finally moved to Pariser Platz as Hitler's chief architect, Albert Speer, was drawing up grandiose plans to rip down the old diplomatic quarter of Berlin and put a Nazi showcase in its place. Germany and the United States went to war in 1941.

The postwar communist authorities ripped down the ruins, but the land remained US property and was recovered after the communist system collapsed in 1989.

Germany's top architects are drawing international attention with innovative projects that combine function with aestheticism, integrate their surroundings and are ecologically progressive. (27.01.2008)

US diplomats Tuesday will host a topping-off ceremony for their new embassy in central Berlin. A dispute over security precautions caused major delays for what some see as a symbol of German-American friendship. (10.10.2006)

Do you think the embassy looks like a bunker? Please include your name and country in your reply.

Five cases of "Havana syndrome" have occurred in Colombia. In August, US Vice President Kamala Harris' visit to Vietnam was delayed because of cases there. How the syndrome came about remains unclear.