New revelations about asbestos use in India

A nine-month investigation by the International Consortium of Investigative Journalists has shown how political lobbying and ad buying ensures that asbestos is freely marketed in developing countries such as India. 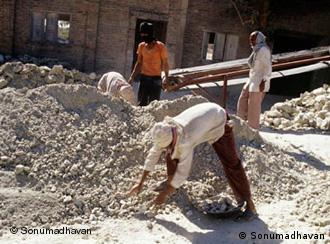 Asbestos use is growing in developing countries such as India

For over 13 years, Shashwati Sarkar, a domestic help, has been living in a shanty town along a railway line in the Indian capital, New Delhi. Of late she has been complaining of breathlessness. She knows it could be the result of asbestos-related ailments and if untreated could possibly lead to lung cancer and skin diseases.

But Shashwati says she has no option but to continue living in her house made of this dangerous material. "For years now I have been living under a roof made of asbestos. And so are the doors. Of late when I close the door, I feel a problem in my breathing. But what shall I do? We are poor, and where can we go? I know of the bad effects of asbestos especially when particles fall."

Rise in asbestos use

The Indian asbestos industry generates more than $850 million a year in revenue, and directly employs 300,000 people; indirectly, it supports as many as 3 million more. Backed by a powerful lobby, asbestos use in India has risen by 83 percent since 2004, according to government figures. 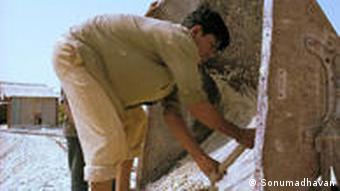 An asbestos mine worker in Andhra Pradesh, India

Given evidence of poor workplace safety and weak regulations, such widespread use could prove disastrous, say health experts. Asbestos products carry no health warning labels and trade unions have no mandate to prevent asbestos-related disease at workplaces. Indian consumers are also unlikely to know that as asbestos-cement erodes and crumbles, dangerous fibers are released.

"Even if a single fiber is inhaled, it is capable of causing mesothelioma, and that has been proven by epidemiological as well clinical and experimental studies," says Dr Sanjay Chaturvedi, a professor of community medicine. "We have to preclude all possible release of asbestos in the environment wherever there is a possibility of human exposure."

Research has shown that worldwide, at least 90,000 people die every year from illnesses resulting from occupational exposure to asbestos. However, this number only takes into account workers and ex-workers who have been identified with asbestos-related lung cancer, mesothelioma, and asbestosis. 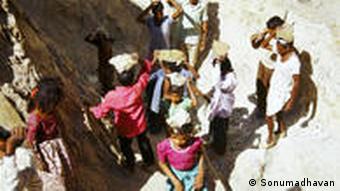 Workers at an asbestos mine in Udaipur, India

Gopal Krishna, who heads the Ban Asbestos Network of India, says as the market is growing at a tremendous pace, nobody in India has time to deal with complaints.

"There is an incestuous relationship between the asbestos manufacturing industry in India, the government and the political parties. That incestuous relationship has led to it being supported. In India we have some 300 medical colleges. None of them has the competence to diagnose the diseases caused by asbestos. So lack of documentation does not mean a lack of a problem in India. The rate of consumption of asbestos is rising at an alarming rate, so are the diseases caused by asbestos."

But as the Indian states and union territories have no mechanism to prove that lung cancer deaths and other skin diseases are being caused by asbestos exposures, the Indian asbestos industry could not care less about global efforts to ban the material everywhere including India.

Thousands of tons of electronic scrap from all over the world ends up in India annually. Although recycling can help protect the environment, a closer look at the e-scrap business reveals an extremely harmful industry. (15.06.2010)

More than 25 years after a gas leak from a Union Carbide plant in Bhopal killed an estimated 25,000 people, an Indian court on Monday found the eight accused guilty of criminal negligence. (07.06.2010)

China’s state-owned news agency, Xinhua, reported on Thursday that 150 people had tested positive for mercury poisoning. They are workers employed by the Foshan Electrical and Lighting factory in Guangdong province. Just two days previously, over 50 children were reported to have lead poisoning in the Jiangsu province. (07.01.2010)

Website of the International Consortium of Investigative Journalists (ICIJ)