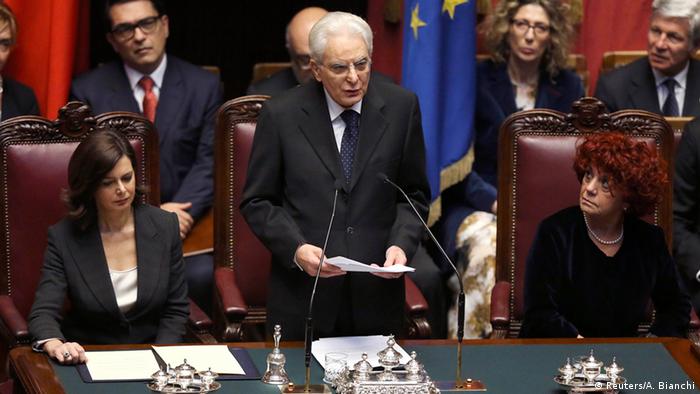 In his inauguration speech to Italy's parliament on Tuesday, newly sworn-in President Sergio Mattarella, aged 73, prioritized national efforts against organized crime and corruption as well as reforms aimed at getting the country's recession-hit economy back on track.

"It is essential for budget consolidation to be combined with a strong growth initiative, to be formulated first of all at a European level," Mattarella said, on a day when Italian Prime Minister Matteo Renzi was due to meet his freshly elected Greek counterpart Alexis Tsipras in Rome to discuss Greece's new anti-austerity course. On Monday, Renzi reiterated his long-standing view that Europe must abandon austerity.

Mattarella drew attention to Italy's own economic woes, saying the slump had "protracted itself beyond all limits," fuelling injustice, poverty and social exclusion as well as threatening national unity. He also denounced pervasive corruption in the country, which he said was "penalizing the honest and the capable."

Mattarella, a constitutional court justice and former Christian Democrat who originates from Sicily, is closely associated with the fight against organized crime in Italy. His elder brother, who was president of Sicily's regional government, was murdered by the Mafia in 1980.

He was elected by Italian lawmakers on Saturday to succeed Giorgio Napolitano, who resigned in mid-January at the age of 89, citing fatigue two years into his second seven-year presidential term. Napolitano had only agreed to begin a second term after lawmakers could not pick a replacement for him at that time. Mattarella has become the 12th president since Italy became a republic and is expected to oversee the political and economic reforms driven by the government of Renzi, who had backed him for the post.

The office of president is a mostly ceremonial one in Italy, though their influence increases greatly in times of political crisis, which have been frequent in recent years, especially in relation to the eurozone economic crisis and the scandals surrounding former premier Silvio Berlusconi. Italian presidents have the powers to nominate prime ministers, reject laws or call snap elections. In his speech, Mattarella said he could be described as a political "referee."