A new museum is set to open at the site of Roman baths at Xanten near the German-Dutch border. The museum aims to help visitors immerse themselves in the architecture, sounds and smells of the Roman settlement. 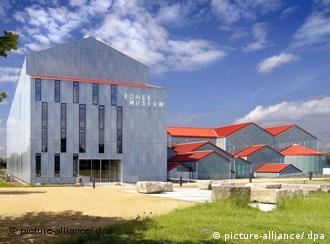 The museum's dimensions were based on the original buildings

Germanic and Celtic barbarians, accustomed to living in squat log huts, must have gasped in amazement when they first caught sight of the towering town center of Colonia Ulpia Traiana some 2,000 years ago.

The museum evokes the lofty Roman basilica, which served as a lobby for the baths. The 24-meter (79-foot) building was the height of a modern-day, eight-story apartment and had a gabled roof topped off with red Roman tiles. 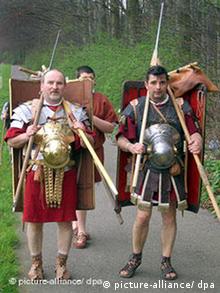 To help visitors understand the massive scale of the buildings, architects built steel-framed buildings the same size as the originals on the site of the old bathhouse and ancillary structures. Its height was calculated from the dimensions of its foundations.

The new museum, part of the Archaeological Park at Xanten (APX), aims to offer the modern visitor a fresh perspective on Roman civilization. It's out-of-the-way location means that the museum does not fight for space with a bustling modern city like the many archaeological remains that can be found in German cities such as Trier, Mainz, Cologne and Bonn.

Inside, visitors can see all the oddities that have been excavated from the site in the Rhine valley, ranging from the waste heap of a workshop that used to make clay lamps to the gravestones of important citizens and the remains of a Roman river barge hung in mid-air.

Getting a feel for the times 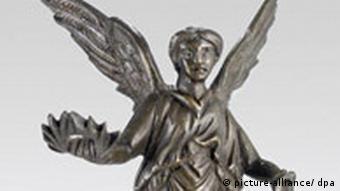 The designers wanted visitors to understand the smells and sights of ancient Rome. There are boxes where visitors can feel the ruins' broken roof tiles or smell typical Roman spices.

"Our museum is not there to show which archaeologists dug up the most," Hans-Joachim Schalles, director of the museum, told DPA. "It's there so ordinary people can see what a Roman town was like."

Visitors can walk on a glass floor over a lane with the deep wheel-ruts of Roman carts in it and the footprints of children's bare feet and the hob-nailed boots of Roman soldiers, all preserved for nearly 20 centuries in the mud.

The museum's 2,500 items show how an earlier Germanic village was converted into a rich city of the Roman Empire, decorated with murals in the style of Pompeii and with expensive glassware on the tables and was then conquered by Frankish tribes. 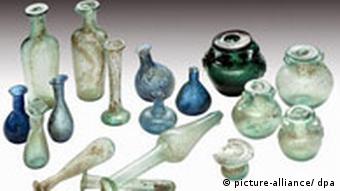 Archaeologists have made many important finds in Xanten

The biggest item in the new museum building is a barge, the smallest the bones of a Roman lapdog. Next door are the remains of the baths, which are protected from rain and snow by sheds which allow the outside air to circulate.

Experience has shown this is the best way to stop the remains from either completely drying out or becoming moldy from the dampness.

Finds such as a German silver hairpin suggest that the Colonia was an ethnically mixed place, with Celts and Germans living among the Romans and praying to their own gods.

The legions of Caesar Augustus brought this region under Roman control and a collection of their rough helmets is also in the museum. Concealed loudspeakers emit chatter in Latin and other ancient tongues, as might have been heard on the town marketplace.

Around the year 100 of the Common Era, the Roman emperor Trajan funded its expansion into a city of about 10,000 bearing his name. Thereafter it was a major city of the northern empire.

Most of the ruins slumber on undisturbed under the green grass of the APX. Archaeologists are likely to be burrowing and mapping the ancient town for many years to come. Local authorities hope to eventually expand the park to 73 hectares (180 acres) to embrace the entire site.

Plans to build a Jewish museum in Cologne are being put to the test. While originally supporting the idea, the city's mayor is now not so certain any more that the winning design is the best one to build. (17.07.2008)