Buried under flood-water silt for centuries, the site of the ancient hippodrome chariot race track at Olympia in Greece has been located by a team of German scientists using sophisticated geomagnetic technology. 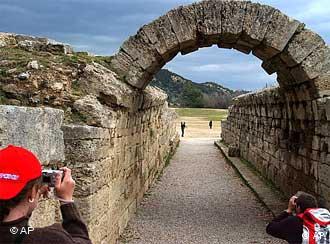 The Hippodrome ran parallel to the Olympia stadium, pictured here

The hippodrome was an immense oval structure, constructed similarly to the Circus Maximus in Rome, where chariot races were staged. Emperor Nero famously competed in the races himself, conveniently "winning" each event he took part in at Olympia.

No visible remains of the Hippodrome exist today, but scholars have made efforts to reconstruct the racecourse from descriptions left by ancient texts, including the writings of an ancient scholar named Pausanias.

Now, for the first time, the site has been located definitively by a research team that included Norbert Mueller, a sports historian from Mainz, as well as Christian Wacker, a sports archeologist from Cologne, and Reinhard Senff, chief excavator from the German Archeological Institute (DAI).

"This discovery is an archeological sensation," said Mueller of the Johannes Gutenberg University at Mainz. The research project extended over several weeks before being completed in mid-May. 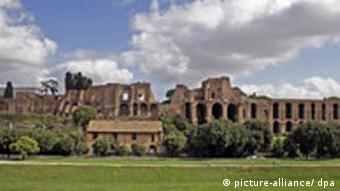 Prior to this, the hippodrome had only been known from written sources. Its actual location had never been found, although German archeologists have been continuously excavating the site where the ancient Olympics were held since 1875.

Since then, archeologists and sports historians from all over the world have been involved in trying to solve this secret.

The area, described by Pausanias to the east of the sanctuary of Olympia, has been flooded by the Alfeios River since ancient times and is covered with silt. In modern plans and descriptions it is usually stated quite simply that "nothing remains of the hippodrome due to flooding in medieval times."

This served as an additional incentive for the German researchers: Using modern geophysical methods, they systematically searched the area for the first time.

The hippodrome begins to take shape

Experts Armin Grubert from Mainz and Christian Huebner from Freiburg, who specialize in the use of geomagnetic and geo-radar techniques, were able to map soil disturbances such as water courses, ditches, and walls.

They detected conspicuous, rectilinear structures along a stretch of almost 1,200 meters (4,000 feet). The researchers believe this to be the hippodrome race course, which ran parallel to the stadium. Structural remains identified as the temple of Demeter, known to have been sited near the hippodrome, were discovered in the northern part of the area investigated in the spring of 2007.

Of particular interest is the fact that at the halfway point of the northern access to the starting-gates -- where Pausanias describes the chariot entryway to the hippodrome -- there is a circular arrangement with a diameter of about 10 meters, clearly marked in the ancient soil layer, which could be the remains of the sacred structure described here by the ancient writer.

The actual starting-gates, with boxes for up to 24 teams of horses, are most probably located under a gigantic pile of earth excavated by the archeologists investigating the temple area since 1875.

The investigation of the area east of the sanctuary of Olympia, funded by the Institute of Sports Science of the University of Mainz and the International Riding Association, has produced the first concrete indications of the location of the race course and its geographical dimensions.

Ten students were on hand to assist Mueller, who is an authority on Olympia.

"The DAI, with its branch in Athens, has done sports history a great service through its contribution," says Mueller. "The project could become a new attraction for the sports world, similar to the excavation of the ancient Olympic stadium 50 years ago."

The area east of the sanctuary of Olympia had not been the subject of archeological investigation before, although the ancient written sources show that this must have been the site of the largest structure built to host events there.

According to Pausanias, the hippodrome lay south of the now researched and reconstructed stadium, and must now be several meters below the current level. It is only here, between the adjoining hills on the other side of the road to Arcadia in the north and the bed of the Alfeios River in the south that the topology is suitable for the accommodation of a race course with a length of more than one kilometer.

The landscape in this area has changed so much that it is nearly impossible to reconstruct its appearance in ancient times.

"Without any need for excavation, modern geomagnetic techniques have given us the first clear indications of the site of the hippodrome east of the sanctuary of Olympia," said Mueller. "This means that archeological and sports-historical research has come a little closer to solving one of the last great mysteries of Olympia."

Munich aims to erase some recent German disasters by hosting the 2018 Winter Olympics, 46 years after the city also staged the Summer Games. (17.07.2008)

UN Special Advisor on Sport Willi Lemke said an Olympic boycott wouldn't achieve anything and would just hurt the athletes. The IOC is the wrong address for human rights issues, he added. (26.04.2008)